The 254th RED HORSE Squadron deployed a majority of its personnel as part of a Total Force personnel footprint to support the Central Command Air Force Red Horse requirements in February this year.

It was a valuable and productive mission for the unit, providing the Airmen valuable engineer experience in a variety of skill sets, according to Lt. Col. Audie Artero, unit commander.

“Overall assessment, in my opinion, is rated outstanding for the first RED HORSE deployment for the Guam Air National Guard…. They personally worked on over 60,000 square feet of pre-engineered buildings,” Artero said. Among other major projects the unit worked on was a runway expansion, he said.

The Guam Guard members were integrated with the 202nd RHS from the Florida Air National Guard.

The 254th RHS were augmented by members of the 254th Comptroller Flight who provided finance support, while team from the 254th Force Support Squadron were assigned to various locations throughout the Southwest region to provide support in the areas of personnel and services.

The Guam Guard Airmen arrived on a contracted military airlift flight at Andersen Air Force Base. Upon arrival, they secured their weapons and equipment at the unit headquarters on base then were transported to the Meehan Theater, where they were reunited with eager and excited family members. 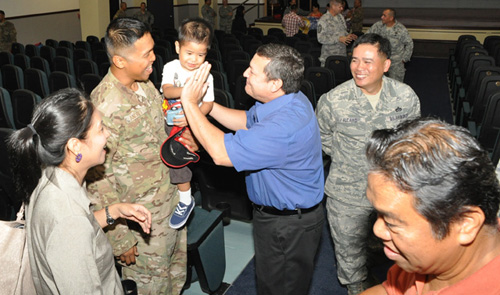 [1049 – SrA Angelo Andres and his son are greeted by Gov. Eddie Baza Calvo at the Meehan Theater on AAFB shortly after he arrived with the 254th RHS from their deployment in Afghanistan. Gov. Calvo was on hand to welcome the returning GUARNG members.]

Earlier this week, nine members of the 254th Force Support Squadron also returned from their deployment in Afghanistan in support of OEF.