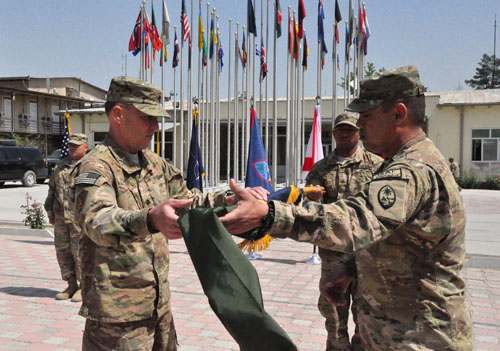 KABUL, Afghanistan – The Guam Army National Guard’s 1st of the 294th Infantry Regiment formally took control of a vital security force mission during a ceremony at Camp Eggers, in the Afghanistan capital Wednesday.

LTC Michael Tougher, battalion commander of Task Force Guam, said Soldiers of the Chamorri battalion have been preparing nearly two years for this deployment, and are ready to take this mission from Task Force Centurion Prime.

VIEW Video of the Ceremony from DIVDS HERE

“TF Guam is very lucky to have the benefit of relieving such an outstanding and professional organization as the 1st Battalion, 167th Infantry. LTC Bass, his leaders and Soldiers, have set the conditions to ensure that my battalion is well positioned to assume responsibility for our mission in support of the NATO Training Mission – Afghanistan. We will not give up any ground already gained by the Fourth Alabama and we will endeavor to ensure the continued progress of this mission. TF Guam is prepared, ready and willing to meet any challenges we will face in this regard,” Tougher said.

[(Photos by CPT Gordon Guerrero)- 0164 – LTC Michael Tougher (left), 1-294th IN RGT commander, removes the casing of his unit’s flag during a Transfer of Authority ceremony in Afghanistan. Battalion CSM Melchor Hennegan (left) is assisting with the removal of the flag casing.]

The GUARNG battalion’s deployment preparation included a couple of annual training missions at Camp Roberts, CA, in May and October 2012 with the assistance of the California National Guard, and members of the 1-196th IN BDE, as the Pre-mobilization Training Assistance Element (PTAE). This was followed by mobilization training at the Camp Shelby Joint Force Training Center, MS, prior to the deployment into Afghanistan in mid-April.

Before the TOA, Soldiers from the seven companies that make up Task Force Guam, conducted a “right seat ride” for several days with their Task Force Centurion Prime counterparts to learn about the areas they are operating in, and the lessons learned in conducting the missions. Once
that was complete, the companies held their own TOA ceremonies leading up to the Task Force TOA.

Although Task Force Guam Soldiers are spread throughout Afghanistan, and working directly with other commanders, 1-294th IN RGT CSM Melchor Hennegan said, “The 1st Battalion 294th Infantry Regiment Soldiers are ready for our missions in all the Regional Support Commands (RSCs) throughout Afghanistan. The very thing I love about our Soldiers is, no matter how rough things got in preparation for our mission, they kept focused, had great attitudes and stayed highly motivated. Their hearts bonded and their camaraderie is unmeasured.”

Both Tougher and Hennegan also praised Task Force Centurion Prime for making the transition an easy one.

The transfer of authority now means the Soldiers of Task Force Centurion Prime can begin making their way back home to Alabama, to be reunited with their loved ones.

The mission now belongs completely to Task Force Guam until it is replaced by another unit, sometime in the late winter or early spring of 2014. Task Force Guam works directly with NATO Training Mission-Afghanistan (NTM-A) as part of the International Security Assistance Force (ISAF).

This deployment, in support of Operation Enduring Freedom, is the latest combat campaign in the unit’s short but proud history.

The battalion was first constituted on 1 October 1987, in the Guam Army National Guard, as the 294th Infantry under the United States Regimental System. Units from the 1-294th IN RGT have answered the call in support of Operation Enduring Freedom (OEF), from 2004 through 2010, deploying to the Horn of Africa, Afghanistan, and the Philippines. This deployment will mark the first time the entire battalion or a Reserve Component unit this large from Guam has deployed in support of the Global War on Terror.