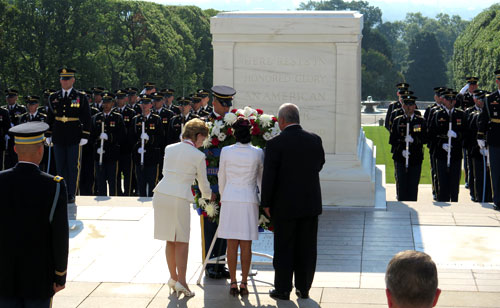 Washington D.C. – Guam leaders and World War II veterans marked the 70th anniversary of the island’s liberation during a ceremony at Arlington National Cemetery.
The memory of the war years will not quickly fade.
Guam leaders, including First Lady Christine Calvo, Army, Navy and Air Force brass, diplomats and others, marked 70-years since Guam’s liberation from Japanese occupation forces.
HEAR Matt Kaye’s report HERE>>>7-12 guliberationceremony.mp3
Congresswoman Madeleine Bordallo, before the ceremony at Arlington National Cemetery.
Bordallo: “For 32-months, we were under brutal enemy occupation.  And the U.S. Servicemen, we also honor them, those who fought and died to liberate Guam.”
First Lady Calvo laid the wreath at the Tomb of the Unknown Soldier.
Bordallo called the First Lady’s participation for the seventieth, “fitting” and noted that no matter how many liberation ceremonies are held, the feelings never fade.
Bordallo: “The emotions and the tribute that people pay, for all those that suffered, lost their lives,  people of Guam, and then, also, our liberators.  So many thousands of lives were lost.  It’s just amazing, how much emotion goes into this event.”
Bordallo points out that since the liberation, Guam has had one of the highest rates of military service per capita, in the nation.
The Congresswoman says she’ll return to Guam for the actual Liberation Day celebration and parade on July 21st, when she says there will be nine liberators in the parade.