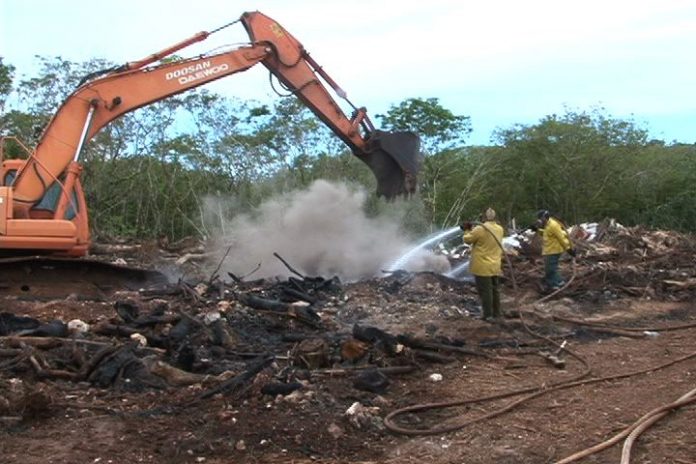 Guam –  Piles of green waste were on fire at a compost facility in the Agafa Gumas area of Yigo over the weekend and as of early this afternoon was reduced to smoldering.

A joint investigation was launched by the Guam Fire Department and the Guam Environmental Protection Agency to find out what caused the fire but both agencies believe it was arson.

EPA Administrator Eric Palacios said Guam Cleaning Masters, the private contractor in charge of the facility, is permitted by EPA to conduct compost in the area but not permitted to conduct open burning.

Palacios said, “What we’re interested in is that we want to make sure the protocols in the company’s operation plan were followed. We wanted to determine whether this situation would have been avoidable. I believe there were indicators out there that it may have been intentionally started and that’s something we’re very keen on. It brings in to question the security of these facilities which we believe are trying to do a great thing for our community and environment so it’s a concern for us.”

GFD PIO Lt. Ed Artero said GFD first received a call from the Yigo Mayor’s Office about a fire on Saturday night and found the fire in two sections of the compost file. Artero explained that even with this past weekend’s rain, because it is a deep seated fire, it rekindled on Sunday.

Palacios said with such a large volume of compost that ended up in flames, it’s a shame and a waste. He said, “It’s a shame because with the growing issue of green waste, this was a facility that was permitted to accept green waste and turn it into a very usable commodity. From what I understand to be a large volume of it to go up in smoke. It’s a shame because it could’ve been used for landscaping, private residences, so it’s just waste.”

Palacios said if caught, the person responsible for the fire would be subjected to any penalties GFD would impose along with penalties from EPA including intentional unlawful burning, air quality penalties, and public endangerment. Palacios advises nearby residents to take precautionary measurements for those who have respiratory issues or weakened immune systems.