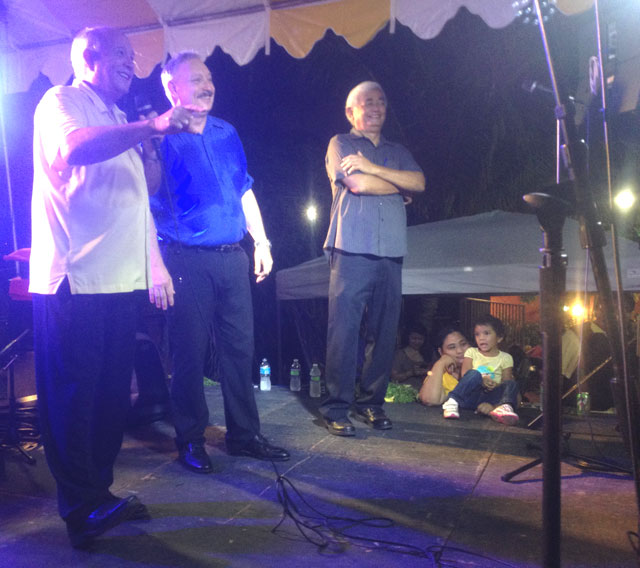 Carl Gutierrez and Gary Gumataotao were officially introduced as the party’s candidates for Governor and Lt. Governor before a crowd of supporters at the Agana Heights home of the former two-term Governor.

Gutierrez took the stage, doing a 2-step as he did, to the familiar campaign theme song  “Your Still the One.”

“You know I won’t be able to live with myself if I don’t step up to the fight,” declared Gutierrez.  “This is a fight that I want to be able to continue until the day I die … I am the last grass roots Governor your going to ever see.”

Earlier in the evening, Gutierrez told PNC News “Look at the feeling tonight … look at the hearts coming here. Your going to see over a thousand people here tonight.”

They’re getting a late start, against a formidable incumbent team, that has deep pockets. But Gutierrez said he is not fazed, and expressed confidence in victory.

“The campaign’s not late. We don’t have to file until July 1st. We don’t have as much money as the other side does .. but we don’t need it. We got legs. We got volunteers … I’m more than confident,” he said.

Referring to Dave Brat’s recent defeat of former House Majority Leader Eric Cantor, Gutierrez said “We’re going to replicate what happened to Cantor,” by running a grass roots campaign, door to door, in the villages around the island.

When he took the microphone, in his first public comments on his candidacy for Lt. Governor, Gary Gumataotao declared “I have a passion for the people,  just like Governor Gutierrez. We’re a team. I’ll back him 100% because its all for you. That’s the only reason I’m running. I guarantee you its not for the money and its not for the ego,” he said.

Gumataotao spoke about the need to create more jobs.

And he suggested that there was some discontent in the island’s business community, accusing the Calvo Administration of favoring some, over others, in the awarding of contracts.

“You see the signs out they say “The Right Direction’. I’ll tell you the right direction is for them to leave Adelup,” he said. 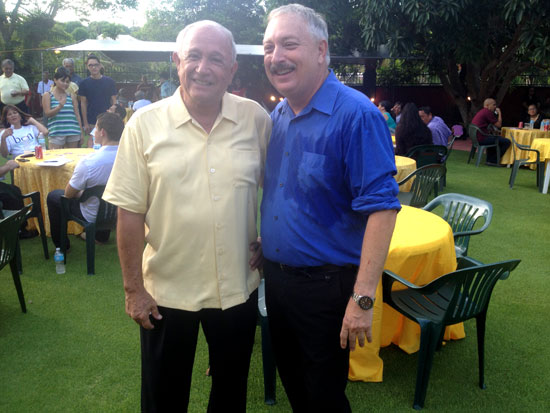 Other Democratic Candidates Introduced; Perez and Underwood Will Co-Chair the Campaign:

Perez, who recently retired as Congresswoman Bordallo’s Senior Policy Advisor, is serving as Co-Chair for the Gutierrez/Gumataotao ticket with fellow Co-Chair, DOE Superintendent, Nerissa Underwood who, Perez said, has agreed to make a run for the Legislature.

The Democratic slate of candidates were also announced at Saturday night’s event.

Many of them spoke about what they said was the Democratic Party’s renewed commitment to party unity. Notable in that regard was the presence of former Party Chairman Tony Charfarous, who did not support Gutierrez in the last campaign.

Tonight, Charfauros took the stage and pledged his support.  “I’m sure many of you are surprised that I’m here,” he said.

“I’m here because I want to make sure that the Democratic party wins Adelup,” said Charfauros.

READ the release from the Democratic Party of Guam below:

Also speaking at the event was Congresswoman Bordallo’s campaign treasurer,  Joaquin Perez, who has agreed to serve as Co-Chair of the Guiterrez – Gumataotao campaign along with Dr. Nerissa Underwood. Perez along with Past Democratic Party Chair Tony Charfarous, whose mentor was Governor Ricky Bordallo,   spoke about the unprecedented unity of the democratic party going into the upcoming election. “When we are united we win”, Charfauros said.  Senator Respicio stated  further, “Democrats are clearly getting enthused about this year’s election and are moving to unite behind our candidates. The upcoming launch of the Gutierrez-Gumataotao team is  energizing not only Democrats but also disaffected Republicans and Independents.  Governor Gutierrez is a proven “grassroots” leader who always fought for working people. Gary Gumataotao is a former Deputy Attorney General  and has extensive private sector experience as a practicing attorney and local businessman. Together I believe they will be a strong team in this year’s contest for Adelup.”