Guam – Governor Eddie Calvo met with Japanese Defense Minister Itsunori Onodera this morning at Adelup over the progress of the military buildup. Onodera is here on island for a short trip to meet with U.S. military officials and take a tour of Andersen Air Force Base and Naval Base Guam.

During a brief media conference in the Governor’s small conference room with local and Japanese reporters, Onodera said through a translator that Guam is an important location in the progress of the governments of Japan and the United States in addressing their realignment and security issues.

“In order to mitigate the impact on Okinawa, we need the support of the Government of Guam as well,” said Onodera.

Onodera adds Japan, Okinawa, Hawaii and Guam are all important components of East Asia security and he looks forward to continued support from GovGuam.

“We want to make progress in the U.S. in the relocation to Guam, but the support of the Government of Guam is necessary,” said Onodera. “I look forward to continued support from you Governor.”

Calvo says when he met with Onodera in his chambers, they had a very cordial and frank discussion on the relocation of Marines from Okinawa to Guam.

“I restated the support our administration has and the people of Guam have for the realignment of force,” said Calvo. “But I also advised him of a major roadblock and hurdle and that is again, the lack of support in funding our infrastructure .”

Calvo made it clear to Onodera that Guam’s water and wastewater infrastructure is far from ready to support the military buildup and the people of Guam can’t afford to pay for the necessary upgrades. He doesn’t believe it’s right for Guam to pay for these costs. And even if it were possible to afford billions in infrastructure support, he estimates it would be over 15 years for island residents to try to digest the cost of upgrades. While Guam has support from the Defense Department, the Navy, the Obama Administration and the House of Representatives, Calvo emphasizes roadblocks are present in the halls of the U.S. Senate.

“I requested to the Defense Minister that he use what ever influence he can to make that known to those folks that are hurdles and roadblocks in this manner, and I did mention Senator McCain,” said Calvo.

Calvo adds Onodera will be meeting with a representative of the Senate tomorrow [Thursday] and committed to discussing these concerns with U.S. leaders.

“The people of Guam are ready and willing to support the interests of the United States,” said Calvo. “We’re very patriotic people, but it can’t be on the backs of the people of Guam.” 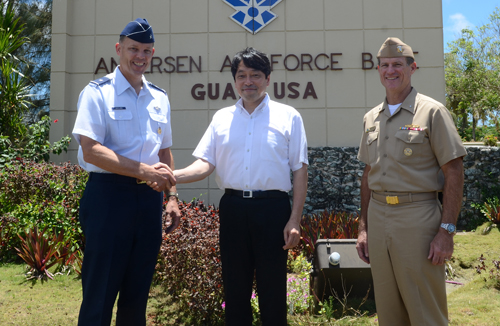