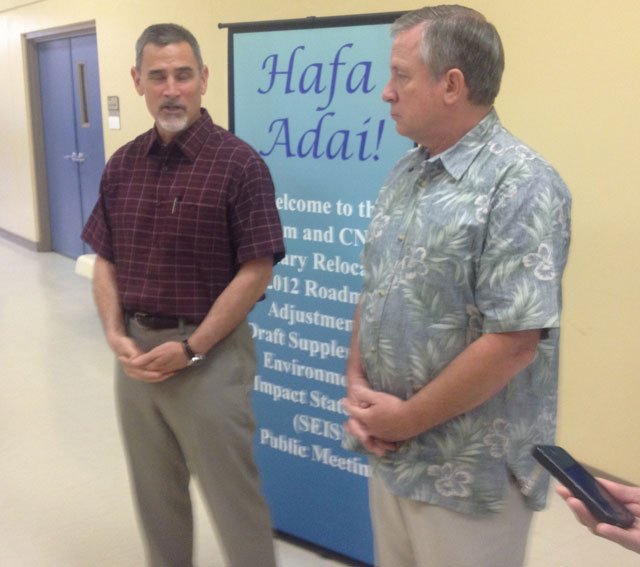 Guam – JGPO Director Joe Ludivichi says that at no time would the proposed “Surface Danger Zone” over part of the Ritidian Wildlife Refuge force the closer of the entire refugee.

Ludivichi spoke Saturday afternoon at a news conference at Okkodo High School called ahead of the start of the first Public Hearing on the Draft Supplemental Environemntal Impact Statement [DSEIS].

Accompanied by Marine Corps Pacific Executive Director Craig Whelden, they reiterated many of the same points made by Deputy JGPO Director Major Darren Alvarez in an interview with PNC News May 9.

“365 days of a year … 100 plus acres, plus about three-quarters of a mile of  beach front would still be available [to the public], independent of the firing range”, said Ludivichi.

The Draft SEIS projects that the firing range complex may be in use for up to 39 weeks a year.

PNC: “The Surface Danager Zone, if it were to cover a part of the Refugee, at no time would that cause the closure of the entire Refugee?”

Ludivichi: “That is absolutely correct. At no time would it close the entire Refuge, there is over 100 acres that the Surface Danger Zone would not impact.”

Ludivichi also said  that the SDZ would not physically disturb the culture sites at Ritidian. “The only significant impact [of the SDZ] would be access”, he said.

He pointed out that most of the cultural sites are located in the 100 plus acres of the refugee that would continue to remain accessible to the public, even when the firing range was in use.

Ludivichi said that it was his understanding that there is only 1 cave that lies within the 12% area that would be restricted when the machine gun firing range was in use.

However Fish and Wildlife Rangers told PNC News Friday during a tour of the area that 2 caves would be affetced.