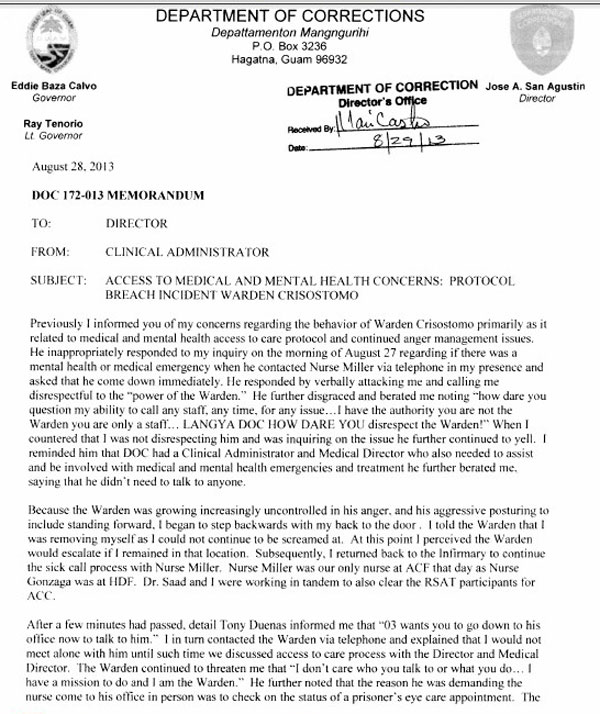 Dr. Leitheiser is a Clinical Psychologist. She resigned from DOC in February of this year to go into private practice. Shortly after she resigned she told PNC News that DOC was facing a crisis over the lack of medical care for inmates that remains unresolved.

In her August 28th letter, obtained by PNC News [SEE BELOW] , Dr. Leitheiser describes an August 27th face-to-face confrontation with Warden Crisostimo during which she says that Crisostimo verbally attacked her calling her “disrespectful to the ‘power of the Warden'” when she questioned him about his request for Nurse Miller to come to his office “immediately.”

Dr. Leitheiser goes on to write that Warden Crisostimo “further disgraced and berated” her by saying “How dare you question my ability to call any staff, any time for any issue  … I have the authority you are not the Warden you are staff … LANGYA DOC HOW DARE YOU disrespect the Warden!”

She describes Crisostimo as becoming “increasingly uncontrolled in his anger” and she writes that “his aggressive posturing” and “standing forward” forced her to step back. She told the Warden that she would not continue to be screamed at, and she left the area to return to the infirmary to continue the sick call process with Nurse Miller who, she says, was the only nurse available to conduct sick call that day at the prison.

Dr. Leitheiser says Crisostimo later told her that he had summoned Miller to his Office to check on the status of a prisoner’s eye care appointment..

Dr. Leitheiser writes that Nurse Miller told her that he and Nurse Gonzaga were frustrated with the Warden because he continued to demand “in person audiences with him  without consideration of the impact on the medical and mental health access to care” for the inmates at DOC.  She says that Nurse Miller also told her that on a previous occasion when he was summoned, all the Warden wanted was “Vicks for himself … and for that I had to completely stop sick call.”

She asks DOC Director San Agustin to immediately intervene writing that without such intervention “we will be unable to implement a system to meet the constitutional requirements of ‘access to care’ for this agency.”

She concludes her letter by noting Director San Agustin’s initial response to the incident, describing a phone call in which Dr. Leitheiser writes that San Agustin expressed surprise at her fearful response saying that as a psychologist, she ‘should be able to handle it.'”

“Please do not minimize the Warden’s hostile behavior towards me and others as simply a female psychologists inability to handle stress. This would be a travesty,” writes Dr. Leitheiser.

She said the Warden should be counseled or ordered to take anger management treatment. “His behavior yesterday morning was absolutely unacceptable and alarming”, she concludes.

The letter has surfaced during the ongoing District Court status conference on the 23 year old Consent Decree hanging over DOC. The status conference began last Wednesday when DOC Medical Director Dr. Raja Saad echoed Dr. Leitheiser’s concerns saying he considers DOC to be under a mental health crisis because the prison has no policies in place to meet minimum healthcare standards. 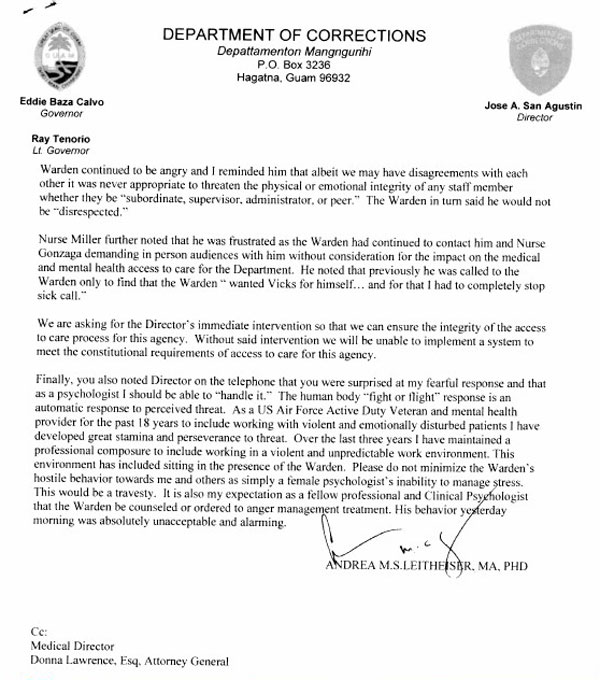