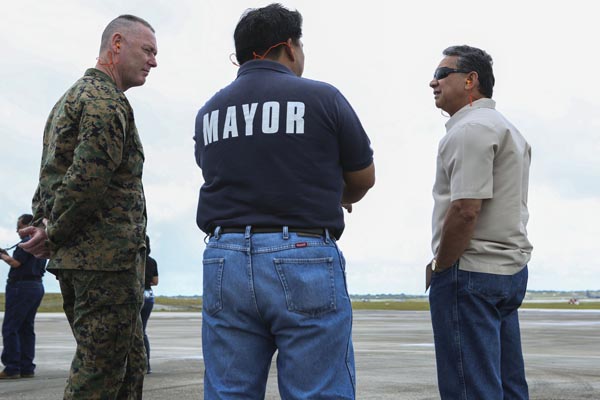 The guests were given a brief introduction outside of the MAG-12 Marine Operations Control Center, viewed the participating aircraft on the flight line, and spoke to several participants, to see and understand what Marines are capable of in a combat environment.

“FFII is an opportunity for MAG-12 to exercise and assess our ability to generate combat power and sustain it in an austere environment,” explained Lt. Col. Bill Sheridan, executive officer of MAG-12, 1st Marine Aircraft Wing, III Marine Expeditionary Force. “We have an existing structure, we are using but the main control center was fully built by the Marines.”

After visiting the MOCC, the group traveled to the flight line where the visitors watched multiple aircraft in support of FF II take off and land up close.

For some, this was not a new experience and gave them a chance to reminisce on their time in the Marine Corps.

[Sgt. Maj. David M. Reaves, left, talks to Jessy Gogue, center and Tom Ada on the flight line during a Media Day Dec. 12 on Andersen Air Force Base, Guam during Exercise Forager Fury II. Both Gogue and Ada have military service backgrounds, so they were interested to see what the Marines were accomplishing. During this training, Marine Aircraft Wing aviation units are able to practice, train for, and execute the six functions of Marine aviation: assault support, anti-aircraft warfare, offensive air support, electronic warfare, control of aircraft and missiles, and aerial reconnaissance. Gogue is a retired Marine Corps captain and Mayor of Chalan Pago-Ordot, Guam and Ada is a retired Army colonel and senator with the Guam legislature. Reaves is the sergeant major of MAG-12, 1st Marine Aircraft Wing, III Marine Expeditionary Force. (U.S. Marine Corps photo by Lance Cpl. Alissa Schuning)]

“I actually worked with a Marine Wing Support Squadron like the one in Tinian supporting the MAG,” said retired Marine Corps Capt. Jessy Gogue, mayor of Chalan Pago-Ordot, Guam. “I’ve been out of the Corps for 20 years now, so I wanted to see where the Corps was at as far as its operational abilities.”

“To me the most impressive part was the logistics and maintenance that is involved in supporting an exercise like this,” said Ada.

The guests saw a small part of what it takes to manage a combat exercise, with the majority of the field work being done on Tinian, but what they did see was impressive, according to Gogue.

“I’m still impressed with the Marine Corps after what I’ve seen,” said Gogue. “It’s great to see the Corps hasn’t changed much. They’ve evolved but the rudimentary philosophy is still the same, take care of your people and take care of your equipment.”
FF II is scheduled to conclude on Dec. 20.