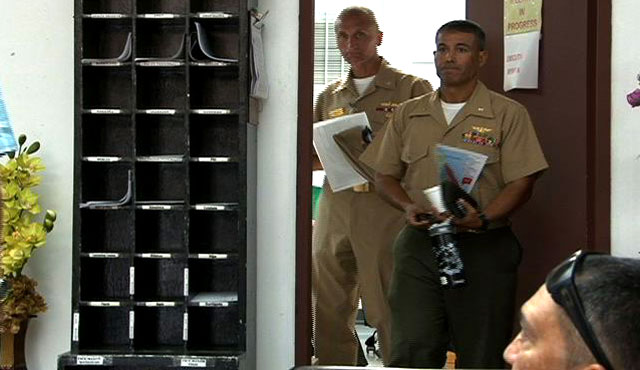 The resolution was passed after a two hour closed door executive session meeting with Joint Guam Program Office (JGPO) officials. PNC was not allowed inside the meeting and Mayors Council President Paul McDonald said the meeting was held to allow mayors to discuss the issue “amongst ourselves” and without “interference”.

They met with JGPO officials about the Navy’s preferred alternative for a firing range complex for U.S. Marines is at the Northwest field of Andersen Air Force Base and more specifically about the Surface Danger Zone (SDZ) that it will require over the Ritidian Wildlife Refuge. When they emerged from behind closed doors they had voted on and unanimously passed a resolution supporting Congresswoman Madeleine Bordallo’s H.R. 4402 which allows the Navy to place a Surface Danger Zone over the Wildlife Refuge.

Mayor’s Council President Agana Heights Mayor Paul McDonald said, “It’s a resolution that we voted on to accept the bill that was introduced by Madeleine our representative which is 4402.” PNC asked, “So the resolution that was passed today is in support of 4402?” “Yes it is,” replied Mayor McDonald.

PNC asked, “Why executive session?” “It’s to the mayors request that we discuss it amongst ourselves as mayors and nobody else,” responded Mayor McDonald. “So you just didn’t want outside participation, public participation or media?” asked PNC “Not at this time,” replied the Mayor.

PNC noted to the mayor that executive sessions are usually reserved for personnel matters and we asked what the reason was for holding the executive session. “This is to have a discussion directly between the Mayors and JGPO and we go some information from them that no interference from the outside it’s like having a class just for the mayors and vice mayors,” said McDonald PNC asked, “Are you guys allowed to call an executive session for something like this if it’s not a personnel matter or something to that effect?” “It’s our discretion it’s the mayors and the vice-mayors that you know we don’t want any other interference,” replied Mayor McDonald.

However, the open government law or 5GCA section 8111d states:

(d) under no circumstances shall a public agency vote on any matter before it during an executive or closed meeting. all voting must be held in a public meeting and minutes shall be kept and opened to the public.

So what exactly did JGPO officials talk to mayors about?

JGPO Deputy Director Marine Major Darren Alvarez says they were talking to the mayors council about some misconceptions about the live fire training range. “There’s a lot of misconception that we’re taking away the Guam Refuge and the fact is right now is that most of the refuge is not accessible to the public. It does have very strict hours.

It’s open from 8:30 to 4:00 everyday except for federal holidays. Also, there is almost 60 percent of the refuge which is off limits to the public at all times. With the SDZ that we would end up putting there because we are looking at putting it at Northwest field it would only add to the restricted area about 15 percent of the beach line. That’s it,” said Major Alvarez. PNC asked, “Would the caves and the latte sites also be included the SDZ that would be closed?” “Out of all the cultural sites there is only one cave that would be limited access and again that is only when one of the ranges is active. That’s it so it’s more of a scheduling issue than anything else,” replied Major Alvarez.