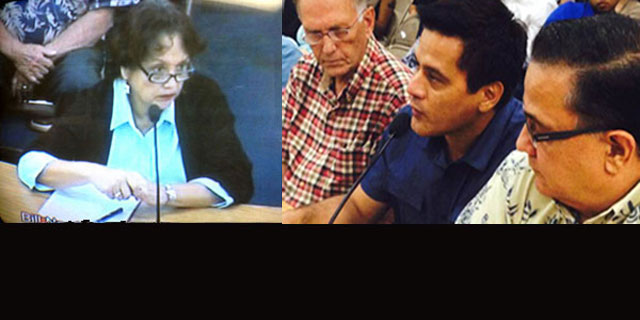 Guam – Bank of Guam President Lou Leon Guerrero told a Legislative Committee Wednesday night that she expects the Federal Government to pass a minimum wage increase that will boost the hourly wage on Guam, no matter what action is taken on the bill before them now.

“Here’s what I really think”, said Leon Guerrero, “I think that the federal Government is going to pass the minimum wage. And we’re going to have to do it regardless.”

Leon Guerrero spoke in favor of the minimum wage hike saying “We have to start as businesses realizing that that’s going to happen. And that we need to then make adjustments within our business models and our strategies.”

In opposition businessman Pete Sgro expressed his dismay that Senator Cruz’s measure was first announced at a Guam Women’s Business Chamber Forum, with input from that Chamber’s members, but no one else.

“What about other people”, said Sgro. “Why was the Guam Chamber of Commerce never consulted? .. not once were we consulted by the sponsor of this bill”, he said.

“I am a minority shareholder in the Bank of Guam … and I have all my kids college funds in that bank. And I have other funds in that Bank .. but after what I heard .. and knowing what the Director said, tomorrow, I am withdrawing every single penny out of the Bank of Guam”, said Sgro. “Because if that leadership believes in what was said tonight, that’s not the Bank  want to do business with.”

Guam Chamber President David Leddy came right to the point saying “On behalf of the Board of Directors and membership, I am here to express our opposition to Bill #316-32.”

Leddy said the Chamber believes “wage increases should be directly related to worker productivity and economic expansion and not through arbitrary increases.”

This was the first of what Committee Chairman, Senator Rory Respicio has said will be 3 public hearings on the proposed minimum wage hike.  The next hearing on the bill is slated for next week Wednesday at 2pm.