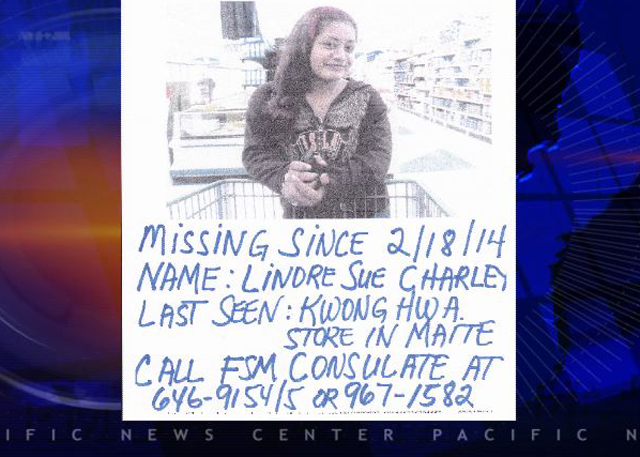 Guam – A missing 14 year old girl has been found, safe and un-harmed.

Yesterday,  Acting FSM Consul General Robson Romolow said the family of the girl had asked them to help find her. He identified her as Linore Sue Charlie, an FSM citizen who just moved to Guam about 4 months ago from Kosrae.

Last week Tuesday she left her apartment in Maite near the Kwang Hwa store where she was staying with her sister.

Romolow told PNC News yesterday the Guam Police Department was actively searching for her, but they had given the FSM Consulate permission to appeal to the public for help in finidng her. .

“We have been tasked and asked by the Governror of the State of Kosrae to also assist and so we are working very closesly with the police department here on Guam. They are very helpful,” said Romolow adding, “the family doesn’t have any information. They have a check and have made contact with the whole Kosraen community here on Guam as you know the Kosrae community is the smallest among the four states in the FSM residing on Guam. So they have gone through all the families here on Guam and nobody knows her whereabouts or come in contact with her for the last 8 days.”

Romolow says there are only about 200-300 Kosraeans on Guam so the girls family was able to contact virtually the entire Kosraen community on island and no one has seen the girl.

Romolow is asking anyone who may have seen her or come in contact with her or anyone with any information to call either GPD, or the FSM consulate at 646-9154 or 9155. Or you can call Romolow at 777-1168. Romolow says all calls will be kept strictly confidential.