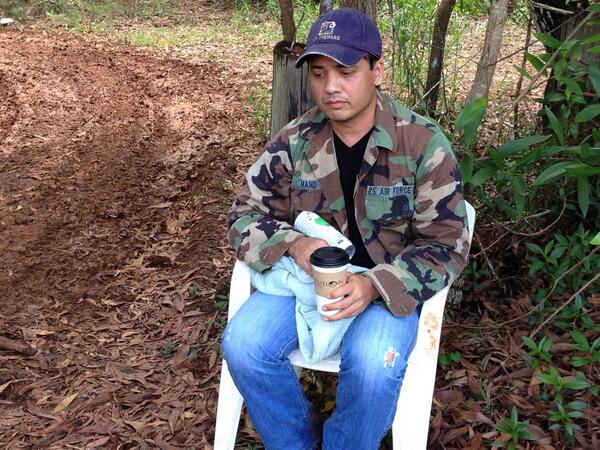 Guam – After an all night search, a Navy HSC-25 helicopter team spotted a missing mother and daughter this afternoon and hoisted them to safety about 1pm.

44 year old Monique Duenas and her 11 year old daughter Ilaria are reported to be tired, and dehydrated, but safe and unharmed.

The helicopter crew reportedly saw the pair in a clearing waving up to them. GFD Lt. Ed Artero reports they were taken to Naval Hospital for evaluation.

The woman and child are the wife and daughter of  Mt. Carmel Music Director Dave Duenas who was part of a team of searchers looking for the pair.

Earlier, Duenas told PNC News that he, his wife and daughter went on an all day “spring break” hike in the Tarzan falls area about 10am yesterday morning. They were with 4 other school children, including Duenas’ younger 9 year old daughter.

Duenas said they got separated about 3:30pm or 4pm yesterday when his wife and 11 year old daughter went back to look for a zip-lock bag they had lost. In that zip-lock bag were the keys to the vehicle they used to get to Tarzan falls and their cell phone.

Duenas said when he got back to the road about 5pm, he had to flag down a car. He said he waited about an hour before calling 911.

GFD Spokesman Lt. Ed Artero said they got the call about 7pm last night and a search was launched immediately. The search went on all night, without interruption.

GPD Spokesman Officer A.J. Balajadia said the search involved Guam Fire, Guam Police and a helicopter from the Navy’s HSC-25 unit, along with a team from the Superior Court Marshall’s Office and local volunteers.

Officer Balajadia described the search conditions as “rough and dangerous due to the recent rains”.

But again, the pair has been found safe and sound. The search is over.

READ the release from Officer A.J. Balajadia below:

SANTA RITA – 6:30pm, Wednesday, April 16, 2014, a search for a 44-year-old, female and her 11-year-old daughter in the Tarza Falls who were hiking has thus far has resulted with negative findings.

Are all involved in the search of these missing mother and daughter.  The search continues this morning, the conditions are rough and dangerous due to the recent rains.