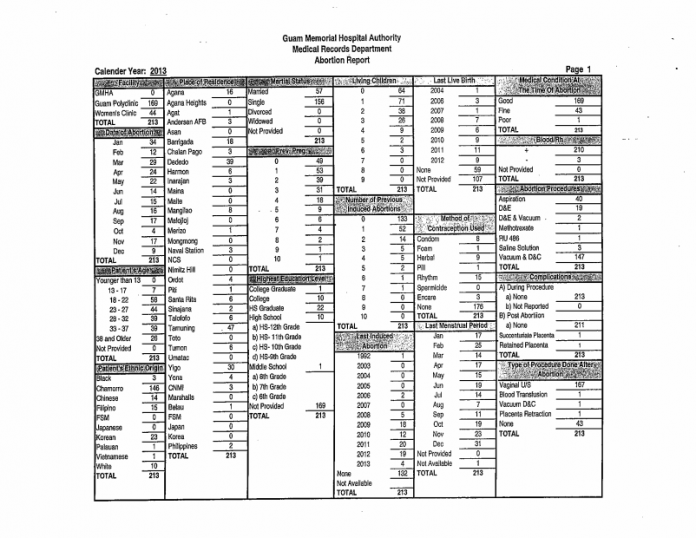 Guam – The number of abortions on island has gone down in the last year, according to the latest statistics from the Guam Memorial Hospital.

While it’s significant, Tim Rohr with the Esperansa Project, a pro-life organization, says Chamorro women continue to top the list among abortions by ethnicity–an issue he says needs to be addressed.

In 2013, there were a total of 213 abortions performed on Guam. That’s 62 less abortions from 2012 when there was a total of 275 abortions. It’s a 29 percent decline and Tim Rohr, with the Esperansa Project, says it’s great news for the island and it falls in line with the national trend which has seen the number of abortions fall to their lowest levels since the 1970s.

“Obviously it’s great that the abortion numbers are down and 29 percent is quite significant in a year. We credit that perhaps to some degree of us actually bringing attention to the issue even if not by the laws actually having an impact,” says Rohr.

While it’s great news, Rohr still expresses some concerns about the abortions report.

“While the total numbers are down, the percentage of abortions by ethnicity of Chamorros is up by 5 percent,” he explains.

In 2012, Chamorro women made up 64 percent of the total number of abortions performed on Guam. In 2013, that number went up to 69 percent.

After Chamorro women, the next ethnicity to top the abortion list is Korean. But it is still substantially less, at just 23 abortions or 11 percent of total. Another issue Rohr highlights is the average age of women who have abortions. And it’s not what most people think.

“Abortions by age continue to show that teens are the least likely demographic to get abortions. Lots of people are still under the impression that this is a teenage problem. If you look at the statistics it’s an adult problem. A large percentage  of these people are married and so there’s something else that’s actually going on in the community,” he notes.

Rohr says he looks forward to seeing even lower abortion numbers on Guam for 2014 since the passage of the informed consent bill into law which should soon take effect. The law requires that women seeking an abortion wait 24 hours before an abortion and look over a pamphlet with detailed information about the procedure.