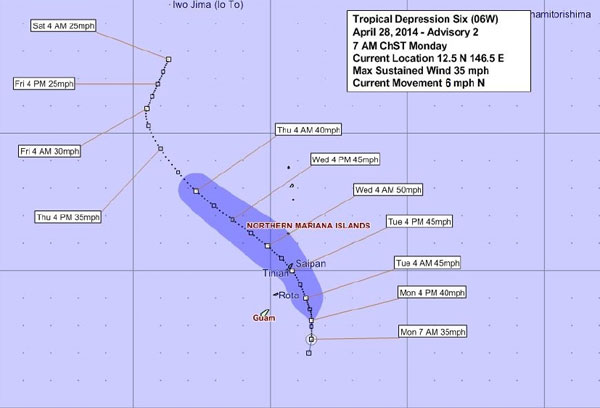 In addition, the National Weather Service advises in its Monday 2pm Monday update that a Typhoon Watch is now in effect for Alamagan and Pagan. A Typhoon Watch means typhoon force winds of 74 mph or greater are possible within 48 hours.

No Watches or Warnings Have been issued for Guam or Rota.

READ the Monday 2pm ChST  advisory from the NWS HERE

According to the NWS 2pm advisory, as of 1pm, the center of Tropical Storm Tapah was fixed at latitude 12.9N and longitude 147.2E. That was >>>

Discussion and Outlook:
Tropical Storm Tapah is moving northeast at 7mph. Tapah is expected to turn in a more northerly direction later today,  gradually turning to the north-northwest overnight and Tuesday with little change in forward speed.

Maximum sustained winds have increased to 60 mph and tropical storm force winds extend outward up to 35 miles from the center.

Tropical Storm Tapah is expected to continue to intensify and reach typhoon intensity within the next 6 to 12 hours.

An intermediate advisory will be issued by the National Weather Service at 4pm followed by the next scheduled advisory this evening at 10pm.

Rain is becoming more evenly distributed around the center and it will begin affecting the Marianas this evening.

Periods of heavy showers and fresh to strong winds are expected to reach the Marianas beginning this evening. heavier rainfall amounts  of  3 to 5 inches and stronger winds of 15 to 25 mph with gusts to 35 mph are possible,  mainly on Tinian and Saipan on Tuesday as 6-W passes over the islands.

Review your tropical cyclone disaster plan and become ready to act if a warning is later issued for your area. Listen for forthcoming information from your local National Weather Service office and emergency management agency.

Mariners are urged to make all necessary preparations to return to port, seek safe harbor and secure their craft.

Monitor weather broadcasts for changes to the latest  forecast and listen for further statements from local officials and media.

Be prepared to take action to protect property if a Warning is issued.

The next scheduled advisory will be issued this afternoon at 3pm Monday afternoon. 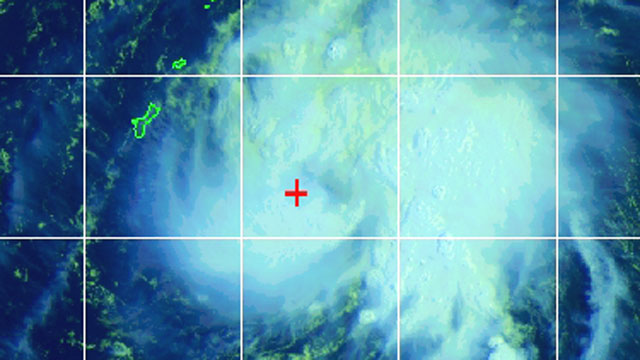