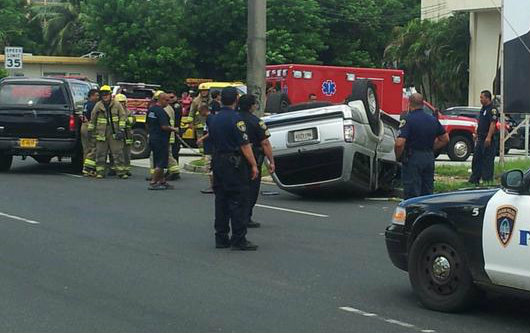 Guam – An overturned car incident in Hagatna just before 11:30 this morning resulted in minor injuries to one person according to Guam Fire Department Spokesman Lt. Ed Artero.

The Toyota 4Runner flipped over on Route 4 near the Marine Corps Drive intersection, blocking traffic coming from the Paseo Loop.  One patient was transported by ambulance to Guam Memorial Hospital, Artero said.  Guam Police Department Spokesman Officer AJ Balajadia told PNC a male was operating the vehicle when he lost control and ran off the roadway.

All lanes of traffic reopened at about 11:45am. According to Balajadia the case has been forwarded to Guam Highway Patrol.