Guam – The Port of Guam has agreed to allow GSA Director Claudia Acfalle to take the lead in the emergency procurement of new backup diesel generators for the seaport.

GM Joanne Brown agreed to let GSA handle the procurement,  after an opinion issued by Deputy Attorney General Pat Mason, an opinion that the Port disagrees with.

The Port has been without sufficient backup generating capacity since May of last year. There is only 1 generator, for the Administration building,  which was moved to power the Load Center 4 area [LC4] where cold storage containers need to be kept cool to preserve the food inside them.

Without sufficient emergency backup capacity, Brown says a major power outage would knock out power to 80% of the Port.

“The bottom line,” says Port Oversight Chair Senator Tom Ada, “is that we all … want to see a reliable generator available down at the Port .. but the way we are progressing on this procurement is that we are just getting ripe for a protest”.

$860-thousand dollars in Federal funds are available to purchase the generators, but Ada fears that delays in the procurement may jeopardize the availability of those funds. The money must be obligated by August of this year.

Deputy AG Mason does not question the Governor’s Emergency Procurement declaration, but he does question the delegation of procurement authority to the Port’s GM, Joanne Brown.

In his letter to Port Attorney Mike Phillips, Mason write “the chief procurement officer is the only entity authorized to procure generators for the Port through the emergency procurement process.”

After reviewing the letter, Port GM Brown agreed, telling PNC News Friday that Port Management, in consultation with the Governor,  has agreed to turn the procurement over to GSA’s Claudia Acfalle.

“We don’t want to argue this, at this point”, said Brown. “We want to move it forward.”  The companies interested in bidding on the generator contract will be instructed to turn their bid packages into GSA and not the Port, said Brown.

“Since this concern was raised by the AG, while we don’t necessarily agree with it, I don’t have time to argue it”, said Brown. “I want to move it forward.”

What Brown disagrees with is Mason’s opinion that she does not have the authority, in this case, to procure what is needed for the Port.

She says Port legal counsel found another AG opinion written back in August 1994 by then Assistant AG Robert Kono who, Brown says, concluded that in this type of circumstance, Port management does have the authority to procure without GSA involvement.  [see Kono’s opinion below].

But to avoid any possibility of a procurement protest, Brown says she has agreed to let GSA take the lead.

“We are working with Claudia to address this”, said Brown. “The Governor has dialogued with both of us on this issue and has asked us to work and move this process forward.”

PNC: “GSA will handle it in close cooperation with you then, is that way it is?”

Brown said she does not believe that anything the Port has done on this procurement to date will jeopardize it or lead to a protest. 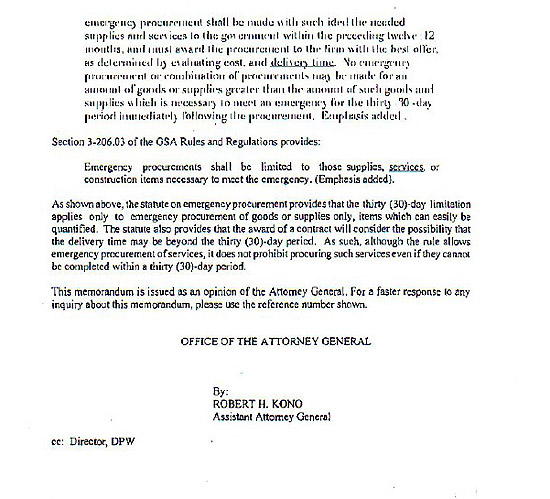