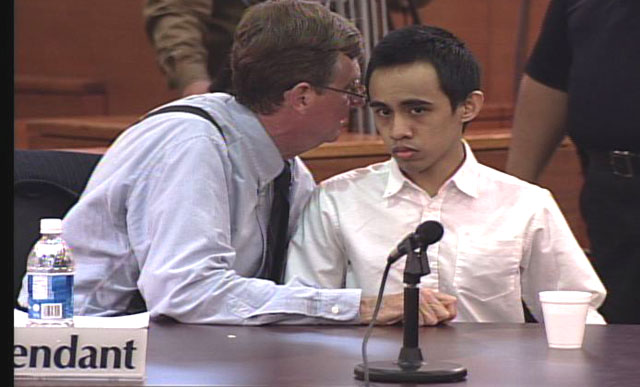 Guam – Opening statements were heard this afternoon at Superior Court in the Tumon tragedy trial of Chad de Soto.

Deputy Attorney General Phil Tydignco was up first and he took the jury step by step through the events of February 12th last year, describing how, he said, De Soto drove his car along a crowded Tumon sidewalk, then crashed into the Outrigger’s ABC Store, then jumped out and began stabbing people.

DeSoto is charged with Aggravated Murder and Attempted Aggravated Murder in the death of three Japanese tourists and the injury of 11 other people on February 12 last year.  His defense attorney, Public Defender Eric Miller, has entered a plea of not guilty by reason of mental illness.

Chad De Soto “pierced and shattered a peaceful night,” said Tydingco, “and he changed the lives of 14 human beings for ever.”

He accused De Soto of  preparing and planning the attack. He said the prosecution’s psychiatrist will testify that De Soto “had the mental capacity to know the wrongfulness of what he was doing.”

Tydingco said De Soto told the court appointed psychiatrist  “he didn’t want to hit people, he just wanted to crash into the wall.”

Public Defender Eric Miller said this case “is about mental illness,  just like cancer. You don’t choose to get it.”

Miller said that 2 psychiatrists he has called will testify that they determined De Soto “is not responsible because he lacked the capacity to know or understand what he was doing.”

Because De Soto has entered a plea of mental illness, at issue in the trial is not whether De Soto did it. But whether he can be held legally responsible for his actions on that night.

Is he guilty of the crimes as charged? Or is he not guilty by reason of mental illness?

Witnesses have been called from Japan and Australia, as well the medical experts who are coming from the mainland U.S. The Defense has submitted a list of 31 potential witnesses who may be called.

There are 92 people on the prosecution’s list of potential witnesses.