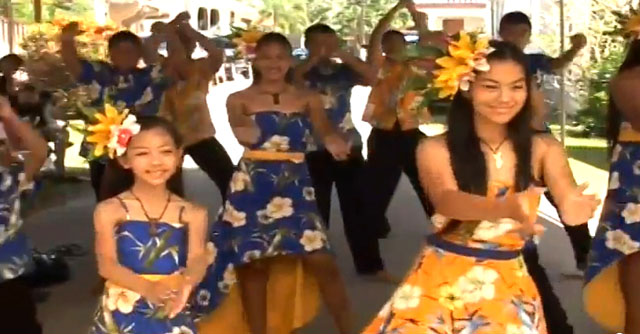 Guam – The Guam Council on the Arts and Humanities [CAHA] and the Guam Visitors Bureau [GVB] sponsored a street festival in Inarajan Sunday.

The  “Ginen i Tano” festival means “From the Land” in Chamoru.

It featured local produce, food, arts, crafts and entertainment by “Ineton Gef Pago”.  There was coconut grating and weaving demonstrations and baked goods from a traditional oven called the “hotnu”.

Vince Reyes is the Director of Inetnon Gef Pago’s Cultural Arts Program and CAHA has appointed him the official National Folk Dance Director of Guam.

The festival was held in part to raise funds for Reyes to travel to the “Chamorro Fest and Uno Hit” conference in San Diego where he has been invited to speak about international folk dance.

“We established the program two years ago in San Diego with just a request to participate in the Chamoru cultural festival and we were very lucky enough to have great support out there and it seemed like there was a need for us to continue going out there and providing programs basically to bridge the gap between our mainland brothers and sisters and those living on Guam.”

When he is in San Diego Reyes will also conduct some dance workshops with traditional Chamoru dance groups in California.