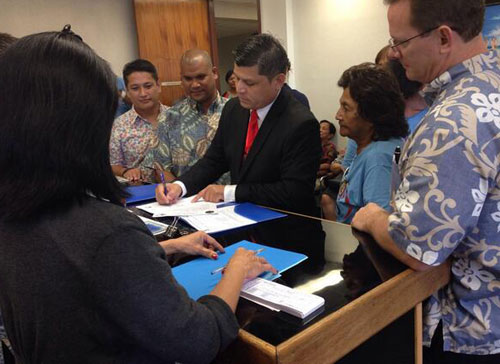 Guam – With the filing deadline just one week away,  the pace of filing at the Guam Election Commission is picking up.

Republican Roland Blas is the latest candidate to file his required paperwork with the GEC. He did so this morning,  accompanied by his family and supporters, including Lt. Governor Ray Tenorio.

Blas told PNC News he’s running because he has a strong desire to serve, and he understands the needs of the island’s people.

He is the 12th candidate for the legislature to file all his required paperwork. More than 30 are expected to file before next Tuesday’s deadline.

Neither of the Gubernatorial candidates have filed yet.

But earlier this month, the Calvo-Tenorio officially kicked off their campaign and both incumbents have declared they are candidates for re-election. And last weekend, the Democratic party of Guam officially introduced their Gubernatorial team of  Carl Gutierrez and Gary Gumataotao.