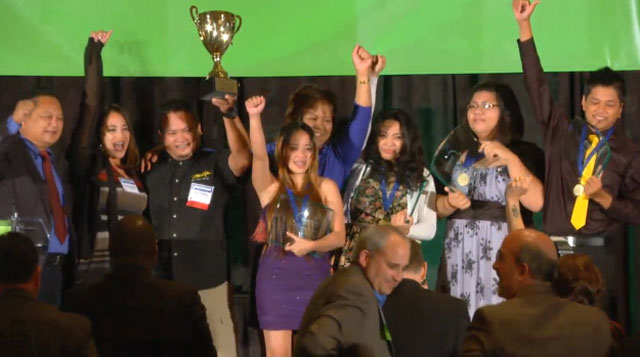 Guam – They came, they cooked, they won.

WATCH the announcement that Guam’s Simon Sanchez had won HERE

They did so by preparing a three-course meal in 60 minutes, using only two butane burners with no access to running water or electricity. Their menu of a lumpia-encased seafood beggar’s purse, stuffed pork tenderloin, and a playful take on coffee and cake impressed the dozen tough judges enough to garner them first place. Not only was their menu evaluated on taste and presentation, but also, the team was judged on their skills, teamwork, safety and sanitation.

Still reeling from shock, team captain Dimla told K57’s Patti Arroyo via phone from Baltimore, “The thing that we all had was our team bonding. The way we worked together on the floor…we all had each other’s back no matter what.”

All four team members will bring home gold medals and be awarded generous educational scholarships to help further their careers in the restaurant and foodservice industry. According to the ProStart Invitational web site at www.nraef.org, in 2012, more than $1.4 million in scholarships was awarded to students by the National Restaurant Association Educational Foundation (NRAEF) and leading academic institutions.

Vicky Schrage is the SSHS ProStart instructor, and Chef Peter Duenas, of Meskla Restaurant and Outdoor Chef fame, is the team’s mentor chef. He also thanked the Micronesian Chefs Association for its help in preparing the team for the competition.

Duenas told Arroyo, “We had to incorporate some of the island style” in the competition menu, and said he will feature the winning menu on his menu at Meskla.

A total of 235 students are enrolled in the GCC CTE ProStart programs in George Washington, John F. Kennedy, Southern, and Simon Sanchez high schools (Okkodo does not yet have a teaching kitchen facility). This is the ninth year that Guam has sent a team to the ProStart National Invitational.