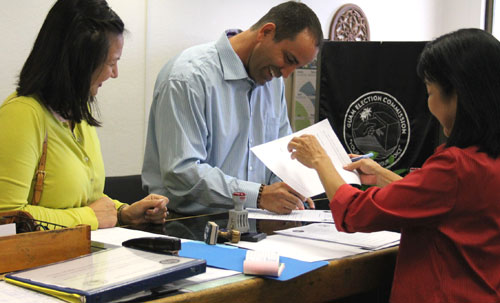 After serving one term, the Senator says he decided to run again because he still has more work to do. Specifically he wants to focus on fighting crime. he’s passed numerous crime related bills that provide stiffer penalties for crimes and bills that support the islands public safety agencies and he says he wants to build on that progress.

The Senator says that constituents come to his office everyday with problems and he wants to find solutions to those problems.

“The climate of fear is enormous on Guam. I think we need to keep fighting crime keep the community safe and allow us as a legislature to work together to support our public safety agencies and if we can do that we have a lot of work ahead of us but if we can do that together with the different branches of government I think we can curb the crime climate and keep our island safe,” said Senator McCreadie.

The senator hopes that the public will see the hard work that he has done and grant him another two years of public service.

READ the release from Senator McCreadie below:

Senator McCreadie files for his second term in office.
FOR IMMEDIATE RELEASE
June 17, 2014

Senator Brant McCreadie filed for re-election this morning at the Guam Election Commission for a seat in the 33rd Guam Legislature.  The Senator believes there is still more work to be done and is committed to his continued service to the people of Guam.

Senator McCreadie states, “I remain steadfast in my commitment to fighting crime and maintaining my role as your public safety Senator.  I will continue to work diligently with my colleagues to protect your families and our future. ”