Guam – Lawmakers did not go into session as planned Monday. Instead they spent the day in meetings trying to figure out how to come to an agreement on a revised budget that would pay tax refunds, the Hay raises that the Governor wants to implement and a full restoration of COLA that GovGuam retirees say was cut in 1994.

Governor Eddie Calvo has asked lawmakers to change the budget bill that they are working on to include funding for Hay raises. The Governor had left in a 2 percent reserve in his proposed budget that he says was going to be used to fund pay raises that were recommended by the Hay study. The Governor’s Spokesman Phil Leon Guerrero explained saying, “The two percent reserve was in place to help pay down the deficit. As we all know, Governor Calvo eliminated the deficit and so what he wanted to use was use that money in that two percent reserve to start paying down other financial obligations particularly an important one that we owe our hard working government employees the hay study.”

The Governor’s budget did not specify that the 2 percent reserve was to be used for Hay raises. Senator Ben Pangelinan then introduced a substitute version of the budget bill that uses this 2 percent reserve to pay $129 million in tax refunds. However, the Governor maintains that only $113 is needed for tax refunds. “We paid $105 million dollars right now and so there’s no indication that it would go anywhere near the provision that Senator Pangelinan is requesting but we want to assure the people that every dollar that’s owed in tax refunds to the people of Guam will be paid and all we ask is that you look at Governor Calvo’s track record in paying tax refunds and we think that it will be clear that people can trust Governor Calvo to pay those tax refunds,” said Leon Guerrero.

Senator Pangelinan responded to this saying, “We are only able to pay tax refunds because we borrowed $350 million dollars and so we haven’t payed our tax refunds because we set aside from the collections on a yearly basis to make those payments. We cannot borrow any more money so it is even more important now that we set aside what is required to be paid. The $129 million dollar came number came from the Department of Revenue and Taxation.”

Although Rev&Tax provided this $129 million dollar figure, Senator Pangelinan says he took a close look at the tax numbers over the weekend and says it looks like GovGuam is going to pay out $120 to $123 million dollars for fiscal year 2012 refunds. “So I’m willing to back off the $129 number and maybe go down to $120 which is something that I’ve presented to my colleagues and discussed about and then when we make those adjustments would we free up enough money to pay Hay and so that is under active discussion with my colleagues in the legislature right now,” said Senator Pangelinan.

Says they are currently trying to find a way to fit in payments for Hay raises tax refunds and even COLA. This morning a group of GovGuam retirees came out to the legislature to lobby for Cost Of Living Allowances. Retiree Frank Hill explains that retirees were asked to sacrifice back in 1994 and have their COLA cut from $1,800 dollars down to $1,100. Hill says the cuts were supposed to be temporary until the economy and finances of GovGuam improved. “From what we’ve heard the deficit is gone and things are improving so you know if everyone is going to be considered we feel we should be considered too because we contribute to the Government of Guam,” said Hill. Fellow GovGuam retiree Joe Chargulaf is also hoping that the COLA can be restored. “I support the Governor in implementing the Hay study for the employees as well as the meritorious(pay). But on the same line retirees have contributed a lot during their time,” said Chargulaf adding, “I feel that we need to be treated equally when it comes to this and I’m also encouraging the Governor to support the retirees.”

Senator Pangelinan believes that if they cut the reserve for tax refunds down to $120 million this will free up $9 million for Hay raises. Then with the announcement of a $9 million dollar bump in Section 30 funding he believes there should be enough to pay for COLA as well. 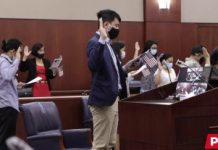