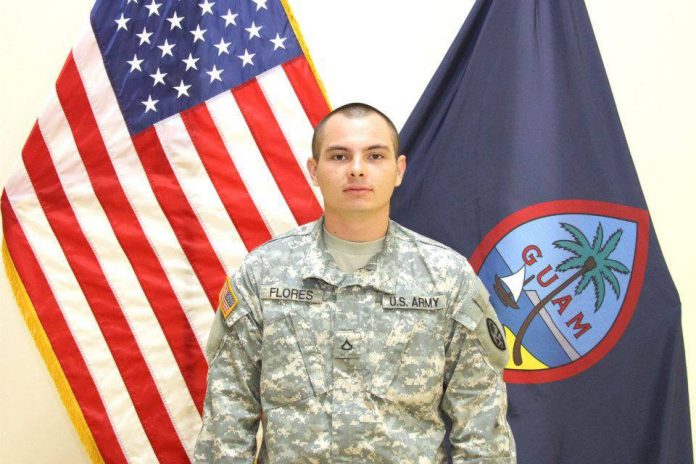 Guam- Sergeant Eugene Michael Aguon was laid to rest Tuesday. The island community came together once again to say goodbye to a man that was loyal to his family, friends and the country he served.

Our Lady of Peace and Safe Journey Catholic Church in Chalan Pago was packed with family and friends, as well military and community members, to pay their last respects to Sgt. Aguon.

The fallen soldier and Specialist Dwayne Flores were killed in Kabul, Afghanistan on May 16, when a suicide bomber rammed into their convoy. Both were part of the nearly 600 Guam National Guard soldiers of the 1st Battalion, 294th Infantry Regiment that are deployed to Afghanistan for the next year.

The Guard Family Readiness Group Echo Historian Josh Blas says many of the members that have loved ones serving in Afghanistan right now gathered together to show support for the families of Spc. Flores and Sgt. Aguon.

“We come in solidarity to support each other and the families,” said Blas.

Fondly known as “Mikey” or “Gene”, the Mangilao resident, formerly of Chalan Pago, is best remembered by his closest friends.

Franco Santos says their mothers were co-workers and he went to Agueda Johnston Middle School and George Washington High School with Aguon. He hasn’t seen him since they graduated from GW in 2007.

“He’s a nice guy,” said Santos. “A lot of people think he’s very straight forward because of how serious he really looks, but me personally, and all our friends, we know him to be a good guy.”

Aguon played in the Guam Little League back in 2001, but was also drawn to serving his country in the military. Santos says he knew a military career was meant for his friend.

“He always wanted to join the military,” said Santos. “That was his thing. He was a daredevil. He was the daredevil of the group.”

JV Donato says Santos introduced Aguon to him and he instantly felt like they already knew each other. He notes Aguon may be the first one to crack jokes, but also the first to show respect to everyone he meets.

“One thing with Gene, is he’s very trust worthy,” said Donato. “He’s such a good friend that I consider him a brother, cause he’ll go out of his way to make sure you’re taken care of. If he’s doing something, he’ll put down what he’s doing and he’ll come just to help me out.”

Donato tells PNC their group shared many memories together and also came up with their own saying to cement their bond of friendship.

“We had our own thing called ‘Rip It Ruff’,” said Donato. “Long story, but that was just something where it was just us…that we knew the definition behind it. And it kind of defined us as friends.”

For Taylor Taitague, Aguon was also his second cousin.

JR Mantanona tells PNC he considers Aguon one of his best friends since high school.

“Never a dull moment when Gene’s there,” said Mantanona. “We’re always laughing, playing around. I’m going to miss him a lot man.”

He also recalls finding out about Aguon’s untimely death. He and the rest of his friends are still in disbelief about what happened.

“I read it through facebook, through Taylor’s page,” said Mantanona. “And I had to tell Taylor, ‘Taylor, call me up because I need to hear it from you. I don’t know if this is real.’”

The close knit group wore t-shirts to Aguon’s funderal, designed by Donato, to honor his memory. If they could have one last conversation with their friend, this is what they would say.

“’Rip It Ruff,’ said Donato. “That’s one thing with Gene man. We miss you though bro, that’s for sure.”

“I’ll tell him much love primo and until next time for sure,” said Taitague.

“I love you man and I’ll see you soon,” said Mantanona.

Before Aguon was buried at the Veteran’s Cemetery in Piti, military service members lined up both sides of the roadway for the fallen hero. A 21 Gun Salute could be heard as passing showers fell over the cemetery grounds.