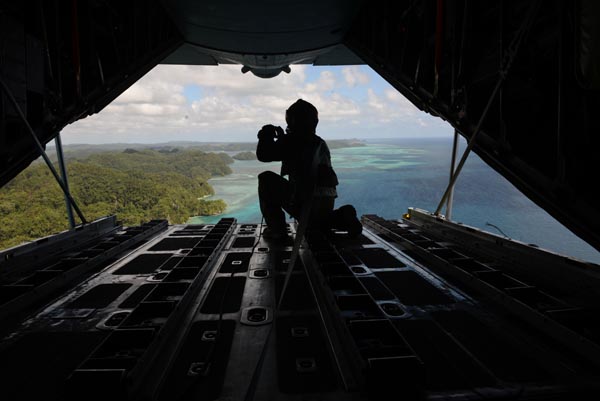 The event marked the official start of Pacific Air Forces’ annual humanitarian airdrop mission throughout Micronesia during the holiday season, which has occurred for the past 62 years.

“The 36th Wing is very grateful to be able to work hand-in-hand with our wingmen from Yokota Air Base, our wingmen from the 734th Air Mobility Squadron and the community of Guam in this combined effort,” said Col. Reid Langdon, 36th Operations Group commander.

“Today, we are honored to partner with local community leaders and volunteers here in Guam, whose generous giving and support for this operation has been remarkable,” Blagg said. “These boxes – filled with good will, joy and hope – represent the tireless efforts of a team of volunteers who embody the spirit of giving.”

[An airman takes a photo while passing over a Micronesian Island in a C-130 Hercules during an Operation Christmas Drop mission over the Pacific Ocean, Dec. 11, 2013. This year marks the 62nd year of Operation Christmas Drop, which began in 1952, making it the world’s longest running airdrop mission. (U.S. Air Force photo by Airman 1st Class Emily A. Bradley/Released)]

Hechanova agreed, stating that the momentum that builds with each year’s planning and execution is infectious for all of those involved.

“We are saving lives every day and ensuring they have a good Christmas once again,” Hechanova said.

Following the ceremony, two C-130 Hercules aircrews from the 36th Airlift Squadron took off from Andersen to conduct the first OCD airdrop missions. The first flights began the dispatch of 300-pound airdrop bundles ready for delivery to islands located in the Federated States of Micronesia, approximately 350 miles from Andersen. First on the crews’ list were Ifalik, Faraulep, Piig, Falalis, Eauripik and the Woleai Atoll.

This year, aircrews are slated to deliver 32,000 pounds of supplies, clothing and food to 57 islands over the course of the weeklong mission.

Operation Christmas Drop is the longest-running humanitarian mission backed by the Department of Defense. The annual mission began in 1952 when an aircrew assigned to Andersen was flying over the Micronesian island of Kapingamarangi when they noticed residents waving to them. The crew gathered items on the aircraft, circled around and sent a container of supplies down on a parachute.

Though the islands are self-sustaining, volunteers look forward to giving as much as they can in the spirit of the holiday season. Donations include water, rice, canned food, clothing, books, school supplies, gardening items and toys.

“These people are not in crisis; however, we are making their quality of life much better by providing them supplies,” said Master Sgt. Bobby Lynch, 2013 OCD committee president. “This mission is also an excellent opportunity for our airmen to train.”

The 18 missions flown during OCD serve as a chance for C-130 aircrews to practice low-cost, low-altitude airdrop tactics, techniques and procedures. The capability is transferable across a variety of mission sets, from combat operations to humanitarian relief and disaster response.

“We train all the time for real-world operations, and this kind of thing is what we dream of,” said Maj. John Chrampanis, 36th Airlift Squadron C-130 pilot. “We were just in the Philippines helping them recover, and now we are here doing this humanitarian mission. It’s nice to be able to make an impact.”