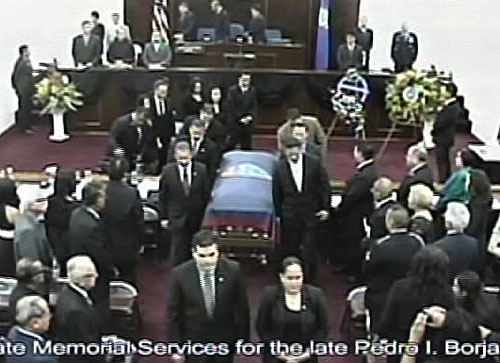 Guam – A State Funeral was held this morning at the Legislature for former Chalan Pago-Ordot Mayor Pedro Iriarte Borja.

Borja was elected Mayor in 2004 and served the residents of Chalan Pago-Ordot from January, 2005 thru January, 2009.

Borja passed away last Friday, May 30, at Guam Memorial Hospital.  He will be buried this Saturday, June 7th, at the Guam Veterans’ Cemetery in Piti.

Governor Eddie Calvo declared a State of Mourning for Borja praising him for his “ability of the youth of Chalan Pago & Ordot to finish school and qualify for careers that will lead to success.”

The Governor also credited Borja for establishing athletic programs and encouraging families to send their children to participate. “His initiatives built character, sportsmanship and citizenship in the village youth. As a result, today, those children now are young adults who are more prepared for the years ahead.”

Dededo Mayor Melissa Savares said, “I learned a lot of things from Mayor Borja. He was very quiet, he was wise, he was humble. He was truly a man of faith. He cared about his wife, his children, his grandchildren, and great grandchildren. Adios Mayor Borja. The stories of your lifetime and experiences will live forever.”

During the funeral, the Mayors Council of Guam presented the mayors’ wreath. A legislative resolution and proclamation were also presented to recognize and memorialize the late Honorable Pete Borja for his many achievements and accomplishments.

Senator Tina Muna Barnes said, “During his four year tenure as mayor and as a man of service, the late Honorable Pedro Pete Iriarte Borja was instrumental in improving the facilities at the Jose Atoigue Park and honoring the fallen soldiers of the municipality by erecting monuments in their memory.”