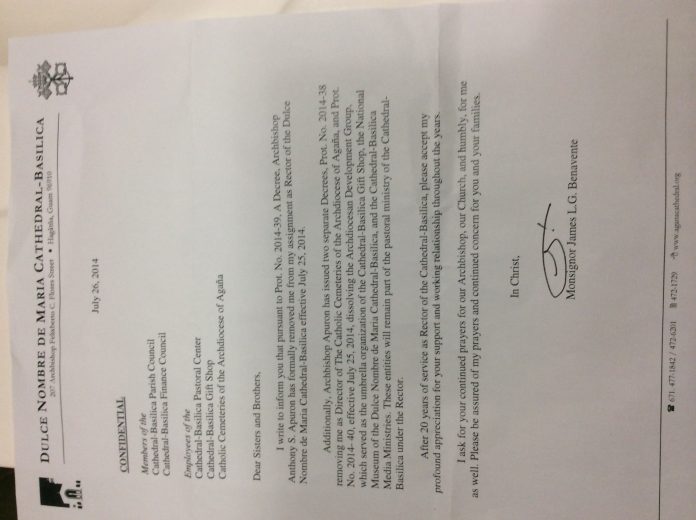 Guam- Family members and supporters of ousted Rector, Monsignor James Benavente, are planning a prayer service for him tomorrow afternoon.

Family spokesperson Gabby Bamba tells PNC that the prayer service is not organized by the Archdiocese, it was in response to concerns by the community on Monsignor James’ removal from the church.

Monsignor James wrote a letter to fellow brothers and sisters over the weekend, informing them that Archbishop Anthony Apuron had removed him as rector of the Dulce Nombre de Basilica. No reason was provided in the letter.

The prayer service will be held at the front steps of the Cathedral Basilica at 5:15 pm. Anyone who wishes to attend is asked to be there by 4:45 pm.

Read the statement from the Archbishop Anthony Apuron BELOW:

I am aware of a call for people to gather in prayer tomorrow at the Dulce Nombre de Maria Cathedral-Basilica in Hagatna. I do not discourage anyone from gathering in prayer. In fact, I encourage them.

Prayer is one of the foundations of who we are as Christians and children of God. We can never pray enough. I encourage all people to gather in peaceful prayer at this gathering and every opportunity they can.