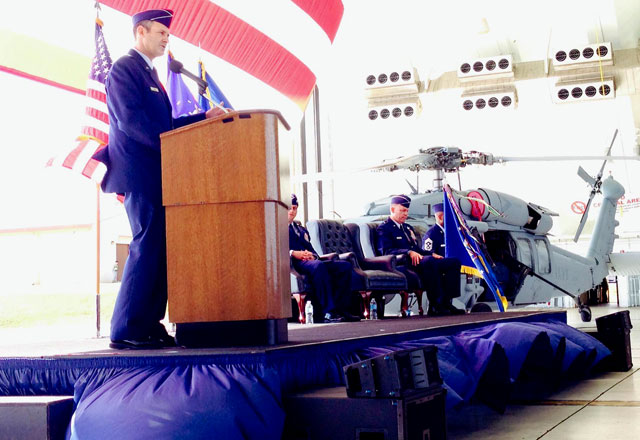 Brig. Gen. Toth took over from Brig. Gen. Steven D. Garland during a Change of Command ceremony in Hangar 1 at AAFB in Yigo.

During the ceremony, outgoing Commander Garland said, “The center of gravity of this institution is you, the 3000 airmen soldiers who are part of team Andersen. Collectively, you are our best and brightest. You are disciples of air power, passionate about this wing and what it means to the Pacific Region. For you, this isn’t an assignment, it’s a calling and it’s an honor to have been one of you.”

Toth comes to Andersen from Joint Base San Antonio-Randolph in San Antonio, Texas, where he served as the Director of Assignments and Air and Space Expeditionary Force Operations at the Air Force Personnel Center.

He takes command of a wing mission that includes the employment, deployment, reception and throughput of air and space forces in the Asia-Pacific region.

Garland  moves on to become the Vice Commander of 14th Air Force at Vandenberg Air Force Base in California.