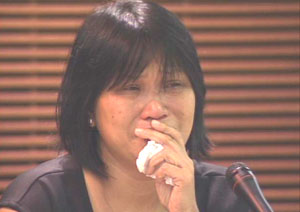 Guam – Some emotional testimony this morning on day 4 of the De Soto trial.

Emma Dela Cruz was at the Jungle Java cafe the night of the attack.

In court today she cringed when she saw De Soto in the courtroom and later broke into tears.   Apologizing several times, Dela Cruz could barely get through a sentence without choking on her words.

On February 12th last year … Dela Cruz said she saw a car speeding by the coffee shop.  When she got up to look out she saw a man stab three different people.

An elderly Japanese woman and a younger Japanese woman holding a baby were stabbed in the back, she said. And she pointed out that it appeared the women had no clue they were about to be attacked because their backs were facing DeSoto.

Also testifying was Isidro Tinso, an employee at the Outrigger Hotel.

Tinoso said he took off his shirt, wrapped it around his hands for protection, and chased after DeSoto. Tinoso says he, too, witnessed DeSoto stabbing the two Japanese women and then he jumped on top of  DeSoto to stop him.

They rolled around on the ground, but DeSoto managed to get away and run in the opposite direction. Tinoso continued to chase DeSoto, finally catching up to him. Others then stepped in to help get the knife away and subdue DeSoto, he said. 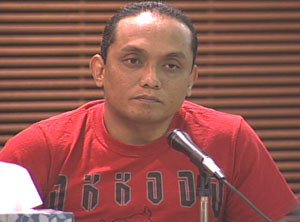