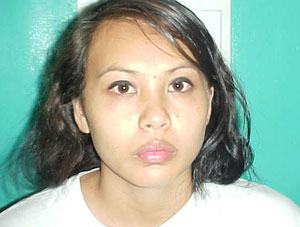 DOC Internal Affairs Officer Jeff Limo says Evangelista was visiting her boyfriend at the Mangilao facility with her three young children in tow.

“During her initial check in at the visitor’s processing center, she looked very suspicious to the officers down there. A pat down was conducted of her which she was cleared of any contraband. When the children were patted down, they found that the, there was substance tucked in inside the pampers of the 4 year old kid,” says Limo.

Evangelista appeared in magistrate court Thursday where she was charged with possession of a schedule 2 controlled substance with intent to deliver as a felony.

According to the magistrate’s report, Evangelista claimed to have only picked up the money from a person named “Z” to give to her boyfriend. She denies knowing it contained any drugs, the report states.

READ the Magistrate report HERE (scroll to 5th one down)

“We did take the individual in for questioning, and she did admit to having possessed that,” he notes. “We do believe, at least what was being reported to my office, again it’s under investigation, but I do believe it was more than a gram [of ice]. It was in a plastic. A very tiny zip lock covered with money and that has also been confiscated.”

Limo warns that DOC is increasing its security measures to ensure that contraband is not smuggled in.

“In the past few months … there’s been a high influx of contraband being air mailed to our facility through families,” says Limo.

Air mail is just one of many ways contraband finds its way into Guam’s prisons.

“When I say air mail, it’s the terminology being called now, is they’ll try to launch it over the fence, both down at the Hagatna and the main facility,” he explains.

Fortunately, says Limo, air mailed contraband seldom makes its way inside. They’re usually confiscated just in time. Another way contraband has made its way in is through family and friends during visitation.

“It’s so disheartening to myself and to the director that the inmates and detainees … we wanna send them a strong message too that this won’t be tolerated up here. The family and friends who try to bring in contraband will be prosecuted to the fullest extent,” he adds.