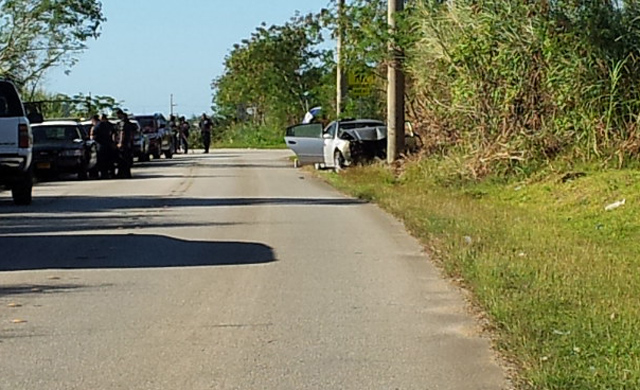 Guam Police Spokesman Officer A.J. Balajadia says a boy who was a passenger in the car with her is still being treated at GMH. He did not know his condition.

Officer Balajadia reports that Fernandez was driving a 2008 Nissan Altima which slammed into the concrete power pole about 2:20pm. It happened on Mendioka Street by the dck Pacific warehouse.

The boy that was injured was a passenger in the front seat of the car, he said.

2.  January 16: 11:30pm. 45 year old Edward Joseph Kestler, was struck by an SUV in Tamuning Marine Corps Drive, near Alupang Towers in
Tamuning. He was pronounced dead at 12:10am at GMH. by a car late Wednesday night in Tamuning.  Police say the victim was apparently walking in the road when he was struck by a black Hyundai Tucson being driven by a man heading south on Route 1. The driver of  the Hyundai was not arrested.

[February 12: 10:20 pm, 51 Year Old Hitoshi Yakota struck by a grey 2007 Toyota Yaris while walking with his wife [also injured] on the side walk along San Vitores Road in Tumon. Yakota died from his injuries on Thursday February 14 at GMH. 21 year old Tamuning resident Chad De Soto charged with murder in Yakota’s death. Guam Police Spokesman A.J. Balajadia says this is NOT being classifed as a traffic related fatality.]

3. February 17: 1:42 am. 27 year old Andre Dela Cruz died after losing control of his  Harley Davidson Motorcycle motorcycle and crashed on Alageta Road near the Route 16 overpass. DOA at the scene.

4. February 21: 10:48am. Troy Morrison riding a 2004 Suzuki 1000 south on Route 4 near the Agat Transfer Station when he lost control and ran off the roadway, crashing into a concrete sewer ditch. Pronounced dead at Naval Hospital. GFD Lt. Ed Artero said CPR was performed on the injured man as he was rushed to Naval Hospital. Morrison was not wearing a helmet.

6. April 3: 1 year old boy dies after vehicle backs over him in Dededo driveway. A 38 year old man was operating a 2009 Toyota Rav4 and backed over the boy. No identities and no names have been released yet.

9. July 26: 5:45am 1 Yigo. 22 year old man dies after his car plows into a concrete power pole. Nobor Wachi Tell was driving a Toyota Corolla north on Route 1 at Shen’s Furniture when he struck the rear of a Toyota Paseo and then veered off the roadway striking the power pole.

11. August 25: Sunday, 1:58 am Piti. Northbound Marine Corps Drive in Piti. 1 male dead following 2 car collision.  4 others injured. A dark blue Toyota Scion being driven by a 19-year old woman was in the inner northbound lane when a  man driving a silver Toyota Corolla, passed her in the northbound outer lane. The Corolla then executed a u-turn causing the Scion to collide with the Corolla. The woman driving the Scion was the only occupant of that vehicle. There were 5 people in the Corolla. All 6 people involved in the accident were “alert and responsive” at the scene.  1 refused treatment and the 5 other were transported to GMH where one of  the passengers who was in the Toyota Corolla was pronounced dead at 4:10am.

12. August 28: Wednesday 3:22pm Ordot. An elderly man died at GMH at 9:06am Friday August 30th, 2 days after the bicycle he was riding was hit by a 2013 Toyota 4-Runner on Judge Sablan Street in front of the San Juan Bautista Church.

13. September 29: Sunday 1:30am, Tamuning. Hit and run on Route 14, Chalan San Antonio, near Toys Tavern. Victim is a man in his 50’s. No description of the vehicle avialable.

14. October 7: Monday 12:12pm – Upper Tumon. It happened on Route 1 near the Nissan Auto City in Upper Tumon. The victim was identified as 40 year old Roland Reyes.

15.  November 9:  Upper Tumon. Motorcycle-pedestrian crash. Victim is 72 eyar old Korean woman identified as Ok Ju Chung. Motorcycle was heading south on Marine Corps Drive when it struck the woman as she crossed the road near Pat’s Window Tinting.  GPD Spokesman Officer A.J. Balajadia reports that the woman was found in violation for crossing the street without the use of a crosswalk.

16. Nov. 22:  18 year old  Rafael Joaquin of Barrigada died at Naval Hospital from injuries sustained during a car accident that happened on Nov. 10th. GPD PIO Officer A.J. Balajadia reported that at 3:18am, Sunday, November 10, a 2008 Mazda CX9 with two occupants, and a 2003 Hyundai Tiburon with five occupants collided into each other on Route 10, by Price Elementary School in Mangilao. Joaquin was the driver of the Hyundai.

*While initially classified as an auto related fatality, this accident was later determined to have been caused by a heart attack. Tuesday December 3: Micronesian man in his 40s dies from injuries sustained during a Sunday December 1 accident. Guam Fire Spokesman Lt. Ed Artero says that it happened just before 10:30 Sunday night on the back road to Andersen in Yigo. MILLER LEMUEL, m/Pohnpei/49/Yigo  .. it was later determined that Lemuel died of a Heart Attack

17. Wednesday December 11: 31 year old Cristina L. Fernandez has died following injuries she suffered when her car stuck a concrete power pole this afternoon in Dededo.Guam Police Spokesman Officer A.J. Balajadia says a boy who was a passanger in the car with her is still being terated at GMH. He did not know his condition. Fernandez’s death is the 18 Traffic Fatality of  2013 on Guam. Officer Balajadia reports that Fernandez was driving a 2008 Nissan Altima which slammed into the concrete power pole about 2:20pm. It happened on Mendioka Street by the dck Pacific warehouse.The boy that was injured was a passenger in the front seat of the car, he said.

DEDEDO – 2:20pm, Wednesday, December 11, 3013, the female adult operator of a 2008 silver Nissan Altima traveling south on Mendioka Street by the Dick Pacific Warehouse, loss control, ran off the roadway and crashed into a concrete power pole.

Both the female operator and the male minor who was in the front passenger seat were transported to GMH.