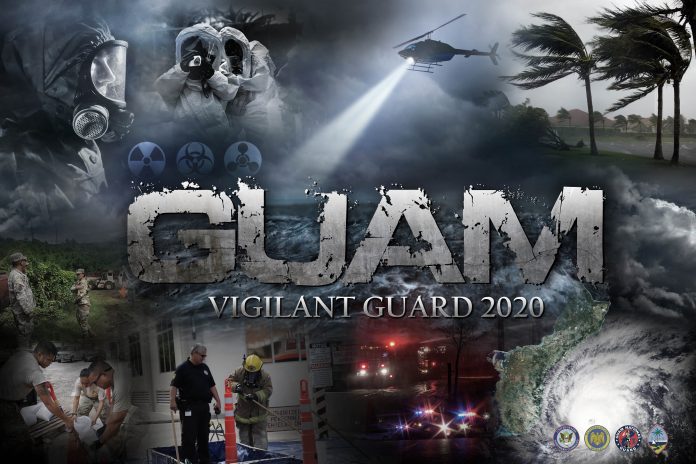 The Guam National Guard will host exercise Vigilant Guard (VG) 2020 throughout the island Nov. 18-22.  The exercise “soft start’ began today with the anticipation of a Super Typhoon and normal responses and preparations that follow.

VG2020 is an exercise program sponsored by the United States Northern Command (USNORTHCOM) in conjunction with National Guard Bureau (NGB) to give states and territories the most realistic civil support/defense support to civil authorities exercise possible, by exercising all aspects of response.

“We are excited to host this exercise because it will test the Guard’s preparedness as well as help increase our readiness should we be called upon to assist with real-world events that may threaten our island,” said Maj. Gen. (GU) Esther J.C. Aguigui, The Adjutant General of the Guam National Guard.

As part of the exercise, there will be heightened emergency response activity island-wide, including helicopter flight, sirens, horns, and loud explosions.  Residents and visitors can expect a slight increase in traffic in the central part of the island due to response vehicles.

Residents, visitors and motorists are advised there may be simulated emergency scenarios as part of the exercise at the following locations which include but are not limited to the Astumbo Gym, the Tanguisson Power Plant, the Guam Memorial Hospital, the Port Authority of Guam, the Dededo Transfer Station, U.S. Naval Hospital Guam, the Malojloj Transfer Station, Radio Barrigada, F.Q. Sanchez Elementary School, Merizo Elementary School, the Northern Regional Community Health Center, Talofofo Bay and the Guard’s Readiness Center in Barrigada.

The public can expect heightened emergency response activities as the exercise is centered on a Super Typhoon response and multiple Chemical, Biological, Radiological, Nuclear (CBRN) Incidents around the Island.  The main CBRN incident is an Explosion at the Port Authority of Guam and the collapse of the “Guahan Hotel”.  With CBRN consequences there are also Medical Scenarios that involve MEDEVAC Units from both the Guam National Guard and the U.S. Navy’s HSC 25.

Besides the CBRN events, the Guam National Guard will work with Guam Homeland Security to ensure the Island is recovered from the Super Typhoon by providing Engineering, Transportation, Security, and Logistical support to the Government of Guam.