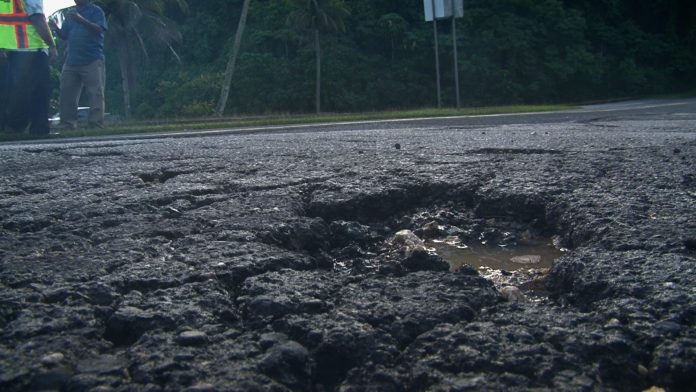 You can revisit the Inrajan road tour as well as read the full OPA audit on our website.

Guam – On the heels of a tour that visited some of Inarajan’s worst roads, one village mayor is speaking out against the Guam Waterworks Authority for making an already bad situation even worse.

“Up to now, people are still trying to veer from that area. It’s very bumpy and it can cause an accident too because people are going to oncoming traffic, and you know we don’t want anything to happen, we have a near miss on that area,” says Lujan.

The section of road Mayor Lujan is referring to is along the Inarajan surfside. She says it all started when a 12-inch water line broke. GWA was called out to fix the leak. This, according to Lujan, is where the problem started. GWA essentially dug up the road to fix the line only to partially put the road back together.

“After the repair is done, what they need to do is repair it back to where they found, but only on a temporary fix. We want a permanent fix and to be even out with the road. Because it’s still bumpy and people are trying to avoid that because, you know, its wear and tear on the vehicle,” says Lujan.

According to Lujan GWA patched the work area with asphalt but again this is only a temporary solution. The village mayor says she spoke with GWA who told her they would be addressing a permanent fix once the FY17 budget is approved but that day has come and gone and still the road remains incomplete.

Temporary fixes have become a frequent for GWA especially when it comes to roads. In Asan alone, GWA has set up two temporary sewer lines along marine corp drive.

Meanwhile, just yesterday the office of public accountability released an audit revealing a near 29 million increase in net revenues for GWA in FY 16. The audit credits GWA’s 16.5 percent rate increase as the driving force behind the surplus.

Lujan says the leak was repaired back in October and since then nothing has happened. She says she just wants GWA to put the road back to the way it was.

“They did put am asphalt on there, a coal mix but it’s still a problem you know. We want it to be leveled off so people don’t have to go onto the other side of the lane, that’s dangerous because of the oncoming lane. But hopefully now, we are already into the oncoming budget and GWA will take a look at that and go back to fix it permanently. Right now, it’s a temporary fix,” says Lujan.