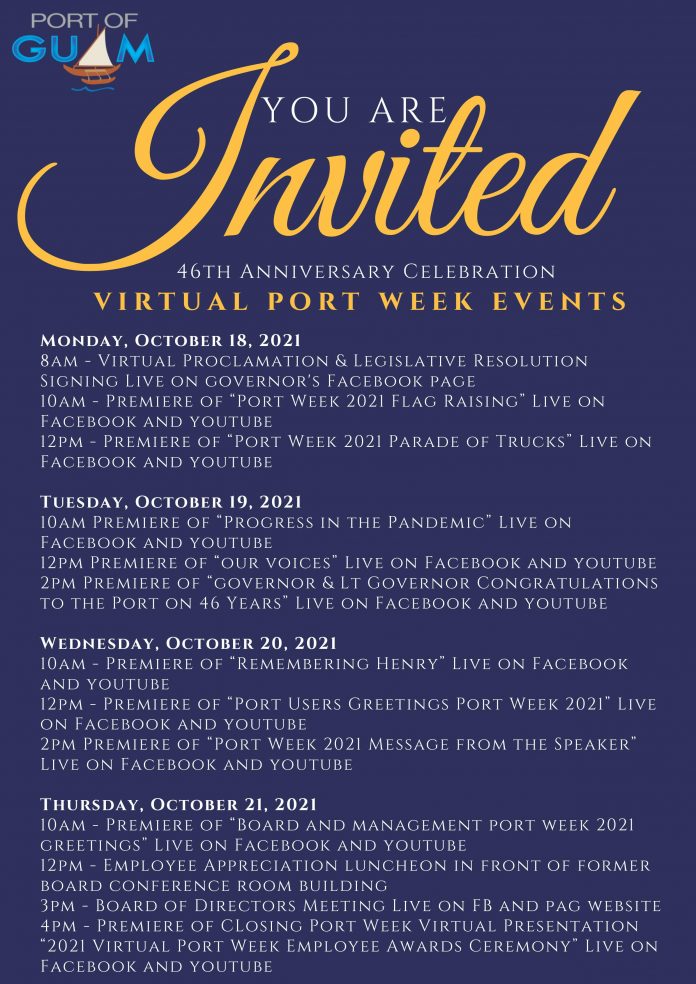 The Jose D. Leon Guerrero Commercial Port of Guam is celebrating its 46th anniversary this week and will hold a series of virtual events starting tomorrow.

The first event begins tomorrow morning with a virtual opening ceremony, consisting of a flag-raising ceremony followed by a parade of trucks, proclamation signing by Gov. Lou Leon Guerrero and Lt. Gov. Josh Tenorio, and resolution presentation by the Guam Legislature. The entire opening ceremony can be viewed live on the Governor’s Facebook page as well as on the Port’s Facebook page.

“As we celebrate 46 years as an autonomous agency, we recognize the backbone of this agency – the employees who work around the clock to keep goods and supplies flowing from our docks to the community and the accomplishments we’ve made this past year as a team,” said Port General Manager Rory J. Respicio. “Now, more than ever, we can see why the Port employees are proudly recognized as ‘Port Strong.’ As the lifeline to Guam’s economy and the neighboring region, the Port has remained 100% operational in spite of the struggles brought about by the global pandemic.”

Events for Port Week 2021 also include a Virtual Employee Awards Ceremony, a Virtual Tribute to our fallen COVID hero Henry San Nicolas, and a series of video premieres celebrating the Port and the men and women behind the Jose D. Leon Guerrero Commercial Seaport. The virtual events can all be seen on the Port’s Facebook and YouTube pages as well as the agency’s Port Week 2021 Website Page at portofguam.com/news/port-week-2021.

On October 31, 1975, the Commercial Port of Guam was established as a public corporation and autonomous instrumentality naming it the Port Authority of Guam. This year marks the 46th anniversary, with a total of 368 employees committed to ensuring the uninterrupted flow of commerce through its wharves. The PAG operates the largest U.S. deepwater port in the region and currently handles approximately 2 million tons of cargo a year. More than 90 percent of the island’s goods and supplies pass over the port’s docks and approximately 30 percent of the total cargo is military-related and forecasted to increase due to the buildup. These sustained activities account for millions of dollars in commodities flowing into Guam’s economy and connecting island residents with global products.