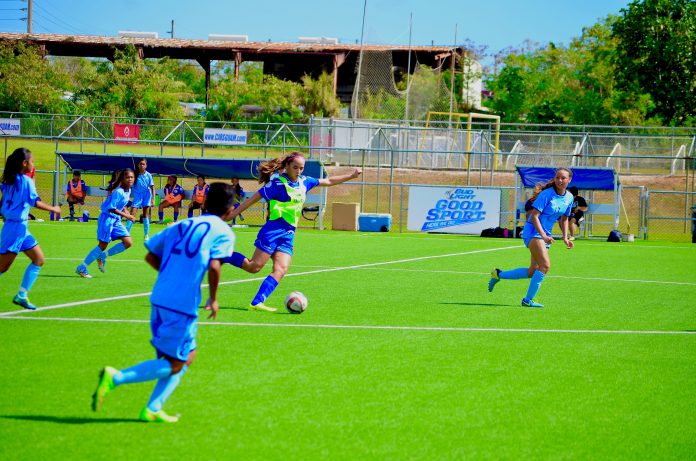 “Women’s competition in Saipan is limited, and in order to do well in tournaments, they need to experience different playing styles than what they’re used to in Saipan. Of course, they also enjoy training and playing at the world-class facility here in Guam.”

HARMON – The Guam Football Academy welcomed some visitors over the weekend. A visiting team from the Northern Mariana Islands was able to gain some valuable match experience during a training camp held at the Guam Football Academy in Harmon, in preparation for international tournaments later this year. The visiting team is comprised, mostly of NMI’s U14 Girls national team training squad with some players from the U16 roster. The 25-player squad, along with six coaches and officials – including NMI FA President Jerry Tan – arrived on Guam Friday morning. Hours after arrival, the team played against Bud Light Women’s Soccer League 2015 Fall season champions Quality Distributors in a close 2-1 match. April Talledo scored both goals for Quality and Jeralyn Castillo scored NMI’s lone goal. Up next was the 2015 Women’s GFA Cup champions, the Lady Crushers. NMI hold their own against the champs, Angelina Villagomez gets two goals, but the Crushers roar back getting goals from Kim Sherman, Ko Minato, and April Talledo. NMI lose that one 3-2. Final match was set for this morning between the Guam U14 & U16 Girls squad and NMI. The visiting NMI find the back of the net first with a goal from Jerlyn Castillo but in the 2nd half Guam score the equalizer of the foot of Jinae Teria. The teams play to a draw with time running out in regulation.