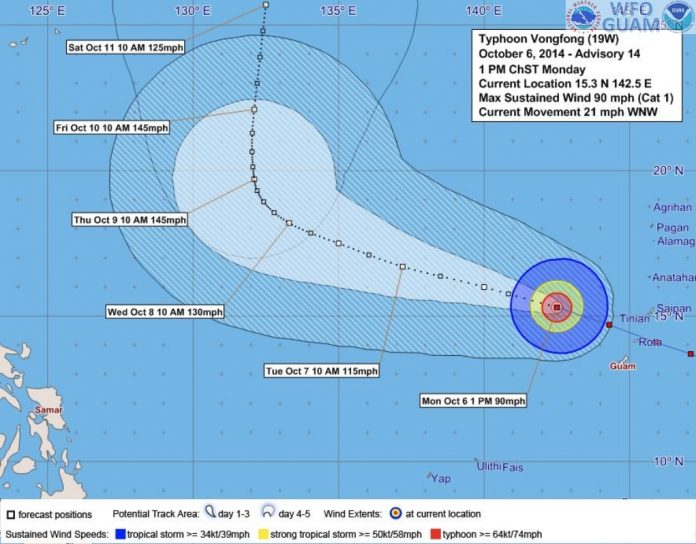 No Typhoons on Horizon for Marianas

Guam – Vongfong passed through the Marianas rather quickly this morning and the national weather service says the horizon is clear for now. the eye of the typhoon passed near the northern tip of rota.

“The typhoon came through the Marianas zones it came through pretty fast about 20 miles an hour. It came from the East Southeast and headed to North Northwest it skirted just north of Rota and came through with an intensity of 105 miles an hour,” said NWS Forecaster Carl McElroy. McElroy says unfortunately for Rota the Southern part of typhoon Vongfong’s eye wall scraped the Northern coast of the island. “So Rota caught the South end of the eye wall the eye was real narrow so only about 5 miles wide which is kind of unusual for these systems usually the eye is much wider so the fact that the eye was small kind of kept exposure to the eye wall very short,” explained McElroy.

The NWS forecaster says the strongest winds on Rota were recorded at 80 miles per hour while the Northern part of Guam received some winds in the 60 to 70 mile per hour range.

So what does Guam’s weather look like on the Horizon? “Well it looks pretty good right now the only possible candidate for development would be a weak system that’s South of Phonepei right now but it doesn’t present that well on satellite and none of our models predict that it’s going to develop. Horizon looks pretty clear right now and we could all use a break,” said McElroy. Vongfong is headed off into the Phillipine sea on a West Northwest track. It’s expected to head North in the next few days where it may pass east of Okinawa.