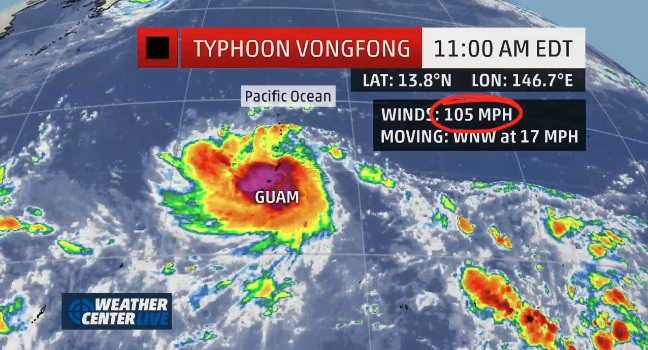 A Typhoon Warning remains in effect for Guam, Rota, Tinian, and Saipan as Vongfong moves away from the Marianas

Guam – Typhoon Vongfong was about 40 miles northwest of Rota and 70 miles north of Guam as of 5am this morning, according to the latest advisory from the National Weather Service.

Typhoon Vongfong is expected to continue to intensify into a major typhoon within the next 24 to 36 hours according to the NWS.

A release from the Joint Information Center at 4am this morning said the northern tip of Guam saw gusts exceeding 50mph. A flash flood warning was issued for northern Guam from the AB Won Pat International Airport to Andersen Air Force Base. Meterologist anticipated two to five inches of rain between 4am and 7am.

About 2.5 inches of rain had fallen as of 3:30am according to a local statement sent by the NWS, another two to five inches is anticipated through this afternoon.