Guam – Larry Raigetal of the Community Based Organization “Waa’gey” has returned to Yap, Micronesia following a planning and partnership tour in the United States.

Raigetal met with a range of public sector officials and private citizens across several states, the District of Columbia and the Territory of Guam. “It was great to talk with policy leaders, philanthropists, cultural aficionados and others. I was surprised by the interest in -and frankly awareness of- the big issues we are facing in Micronesia,” reported Raigetal. “Every where I went, folks were particularly excited about Waa’gey and eager to help.”

Working across Yap State, Waa’gey uses traditional skills to confront the social, economic and environmental challenges faced by the people of Micronesia’s most remote outer islands.

The planning and partnership trip began with time in and around Washington DC. Raigetal conferred with officials from the US Departments of the Interior and Health and Human Services. He also sat down with retired State Department officials as well as former Peace Corps Volunteers living in the Virginia and Maryland suburbs around Washington.

Raigetal then traveled south to the Carolinas. He met with Curtis Loftis, the State Treasure of South Carolina. Loftis is the founder, chairman and primary benefactor of the Saluda Foundation, a development group known for its innovative and cost-effective work in Eastern Europe and South America. He advised Raigetal on how to grow Waa’gey in a sustainable way. “The Treasurer told it to me straight,” joked Raigetal, “never let your work or the group become an end in itself,” he said, “focus on empowering people at the grassroots with the end goal of making the organization itself unnecessary.”

Raigetal also took time to meet with volunteers and donors to Habele, a group that has provided Waa’gey with support for its canoe carving and skirt weaving projects.

Traveling west back to the Pacific, Mr. Raigetal spent several days on Guam. He appeared as a guest on “the Big Show” with Travis Coffman. The call-in talk radio show on KGUM gave Raigetal the chance to share information about the Waa’gey canoe project with Micronesians living on Guam and local Chamorro groups who are similarly working to revive and sustain traditional carving and sailing techniques. Raigetal followed up with site visits and meetings with several of these Guam based efforts, including the Traditions Affirming our Seafaring Ancestry (TASA). He also met with US corporations on Guam interested in community outreach in Micronesia. 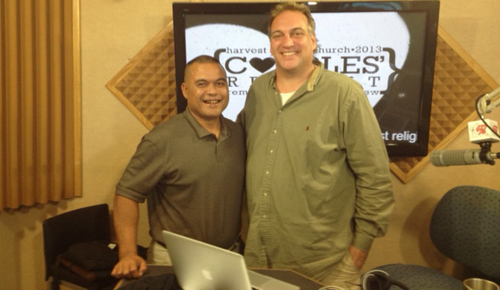 Back on Yap, seated in the open-air traditional canoe house beside the lagoon, Raigetal is circumspect about the trip. “I think of the chilly snowy days, staring up at the awesome monuments in DC and the grace and hospitality of my hosts in the Carolinas” he explains. “Most of all I think to how the lessons learned and relationships made can help the people and places right here in Yap State.”