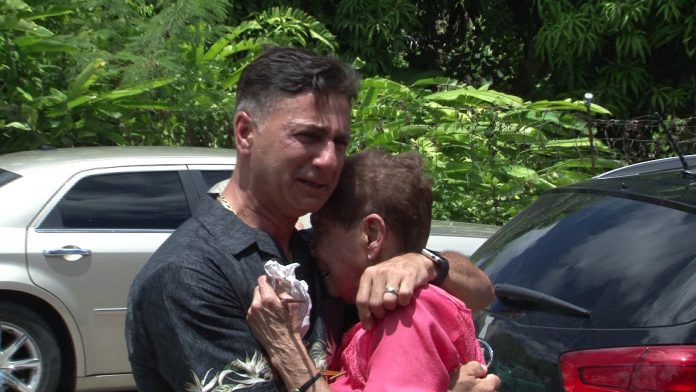 Walter Denton, who says he was sodomized by Archbishop Anthony Apuron, and Doris Concepcion, who says her son was molested by Apuron, held a vigil at the old rectory where the alleged abuse occurred.

Guam – It was an emotional reunion for Doris Concepcion and Walter Denton today as they made the trek to the old rectory of the Our Lady of Mt. Carmel Catholic Church in Agat–the place where they say sexual abuse happened at the hands of Archbishop Anthony Apuron.

“That’s where it happened. Right there. That’s the room,” a sobbing Denton said as he pointed to an east-facing window of what is now the administration building for Mt. Carmel School. “Right there is where everything happened.”

For the first time in decades Concepcion and Denton visited the rectory where memories of a haunting past brought them so much pain. They came here today for a vigil, to say a prayer.

“We pray for all altar servers in Agat; those who were victims and those who were not,” said Deacon Steve Martinez, who led the vigil. “For those victims, we pray especially for healing that they may move beyond the incident that took place so many years ago, that they may find peace and comfort.”

Concepcion and Denton are the second and third victims to come forward, respectively, with allegations of sexual abuse against Archbishop Anthony Apuron.

Concepcion says her son revealed on his deathbed that he was molested by Apuron in the 1970s at this rectory. Denton revealed that he was raped and sodomized in 1977 when he was 13 years old.

While the Archdiocese blamed the allegations on a paid advertisement that came out last month which called on victims of clergy sex abuse to come forward, Concepcion says she didn’t know about the ad and Denton says this is not the first time he’s brought his allegations to light. He says he wrote to the Vatican in August last year.

“Just last year, I did do something about it by writing directly to the Vatican, directly to Archbishop Krebs,” said Denton.

Archbishop Martin Krebs is the papal nuncio out of New Zealand who oversees most of the Pacific region.

“I feel that they did believe my statement of what happened here and that’s when everything started to fall into place for us,” he noted.

Denton also tells us that he also reported the alleged rape to another priest in the 1970s. But at the time, with no concrete sex abuse policies in place, not much was done about it.

“After this incident happened to me when I was an altar boy, I did bring it up to one of the priests that worked here with Father Tony,” Denton recalled.

PNC: “Do you remember the name of the priest you reported it to?”

“Yes, it was Father Jack Niland. But he is no longer with us,” he said.

PNC: “To your knowledge, he never took it to anyone else?”

“To my knowledge, I know that he’s mentioned it to a bunch of other seminarians when he was in the seminary, but as far as mentioning it and doing something about it, no.”