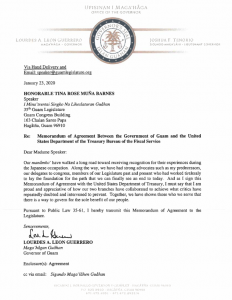 The U.S. Treasury  Department has signed off on a Memorandum of Agreement finally clearing the way for the payment of war claims to some of the survivors of the Japanese occupation of the island nearly 76 years ago.

The Governor told K-57’s Patti Arroyo that the MOA has been approved by all sides and local funds can now be used to pay out claims.

She said the processing will take a few days and the first checks will be paid out by January 31st, as she previously promised.

The governor said that today, Friday, Jan. 24, at 8:30 am, there will be a ribbon-cutting ceremony to open the processing center at the former Hakubotan building across the street from the Tamuning Post Office.

The processing center will be open Monday through Friday from 9 a.m. until 4 p.m.

79 year old Florence Quitugua (left) and her family were first in line this morning at the war claims processing center. https://t.co/opsqFLW5Uq https://t.co/PS3Scr2fT6

The governor signed the MOA during a ceremony at Adelup Thursday morning. She then transmitted it to the Legislature represented by Speaker Tina Muna Barnes.

“I will definitely transmit these documents on behalf of the 35th Guam Legislature so that the journey can continue to move forward and we can give our manamkos what they rightfully deserve,” the Speaker said.

With the signing, the process for payment of war claims authorized by the passage of Public Law 35-61 is now underway.

Tony Babauta, the governor’s chief of staff, said: “If a claimant has an adjudicated letter, an adjudicated claim, a government ID with a picture, you can show up on our processing center. From there, we will have you sign two different documents, a release of information and also an assignment of claim to the government of Guam. That’s all. That’s all a claimant has to do”

The documents are then sent, electronically, to the U.S. Treasury Department in Washington D.C. Babauta said that the first batch of claim documents will go out tomorrow evening. Treasury will take two or three days to verify and authorize the release of the first war claim payments.

He added that Adelup is hopeful to get authorization for the first check by Wednesday of next week.

War claims MOA approved; processing begins tomorrow. https://t.co/VzGzbzR84l The processing center open Monday through Friday from 9am to 4pm. Anyone with questions can call 482-0792 or go to https://t.co/L29SbCvdZA for details. https://t.co/ZeibB83wIE

Anyone with questions about the war claims payment process can call 482-0792 or go to warclaims.guam.gov for details.

“We look forward to giving closure to our manåmko,” said the governor. “It’s a great day for Guam and for our people.”

About 1400 claims will be paid out under the MOA. That’s the number of survivors whose claims had been adjudicated as of the date of passage of the bill that became Public Law 35-61.

Under the MOA, the Treasury Department, in turn, will then compensate GovGuam by releasing Guam’s own Section 30 funds which they have been holding in anticipation of final passage of the federal war claims corrections bill introduced by Guam Congressman Michael San Nicolas which has still not yet been cleared by the U.S. Senate.

During the Jan. 3 signing ceremony of Bill 181 that became Public Law 35-61,  the governor said about $14 million in local funds is available to pay war claims under the local war claims bill.

Treasury has another $23 million in Guam’s own Section 30 funds tied up waiting to be released.