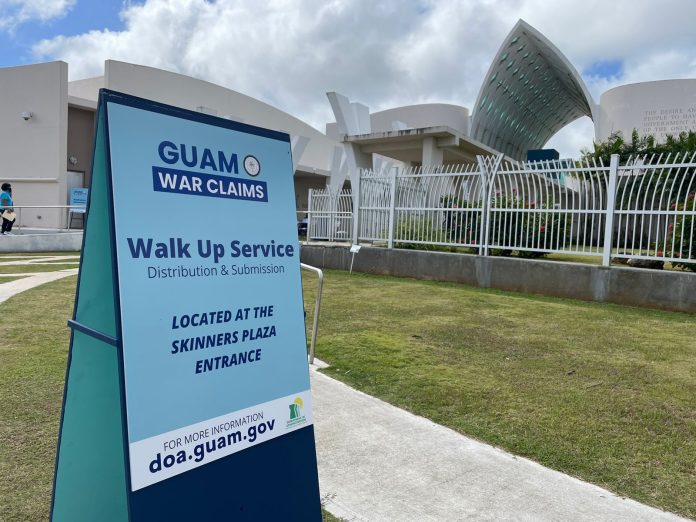 The War Claims Application process started earlier today at 9 am.

Here is PNC’s Don Sulat, who was on the scene.

According to the War Claims Program Director, Arlene Santos, today mainly focused on application pick up, and they are expecting more applicants to come in around next week.

Santos said “Because in order for you to come in and processed you need to have your packet completed. Because there’s a screening process before you come in with a completed packet that will determine whether you’re eligible to apply for this program or not.”

Santos says that they are well prepared to deal with any possible complications that may come up during screening or on the applications themselves.

As for the requirements, Santos reports that in order for applicants to be eligible, they must have been alive after December 23rd, 2016, as that was when, then-President Barack Obama, signed the Guam Loyalty recognition act.

“If you were alive, if you are a claimant and you were alive on that day, moving forward you can still apply. But if you died before December 23rd 2016, you cannot apply for this program.”

Continuing the eligibility requirements, Santos says that those applicants who applied during the June 20th, 2018 batch of War Claims are based on whether or not they filed on time for that batch, adding “So if you were denied, and you actually applied, and were denied, you met the cut off date line and everything you cannot apply for this program. But if you were denied because you had a late filing, meaning you filed after June 20 then you can apply for this program.”

Moreover, according to Santos, after the war in 1945 the Guam Meritorious Claims Act, was made. And because that program was not “fairly equitable” and at that time not a lot of people knew about it, those who received monies from that program are still eligible for this war claims batch. Santos explains “So if you applied in 1945 and you did get money then that would be deducted from what you would have today. So you could apply if you did receive monies in 1945.”

As for those applicants who have a “pending status” from the last batch, Santos says they cannot apply, even if they have yet to receive their monies.

Applicants can pick up their packets at the Guam Museum from 9 am to 3 pm Monday to Friday.