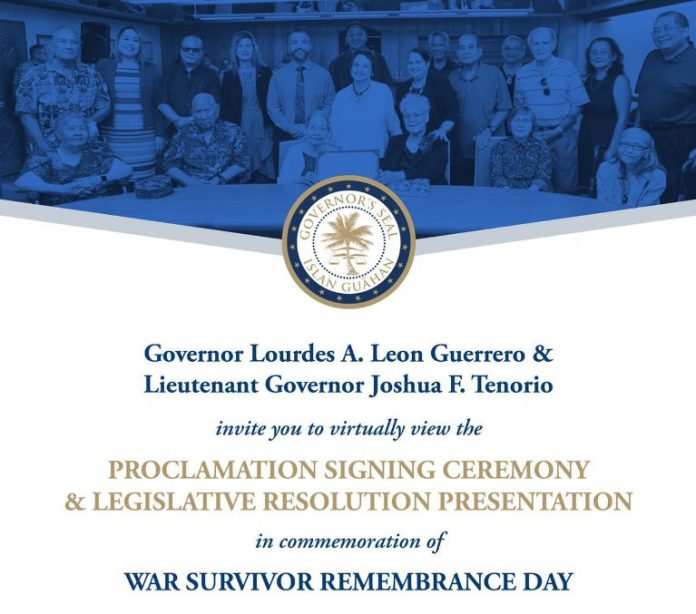 On December 8, 1941, the island of Guam was attacked in a series of Japanese air raids, resulting in the only occupation of American soil during World War II.

In addition to forbidding the practice of indigenous cultural traditions, a total of 1,170 CHamoru’s were killed and another 14,721 went through atrocities of war, including beatings, forced labor, torture, and concentration camps.

Now, Public Law 33-56 designates June 28 of each year as “War Survivor Remembrance Day” as a testament to Guam’s “Greatest Generation.”

“Now, therefore I…Governor of Guam, by virtue of the authority vested in me by the Organic Act of Guam as amended, do hereby call upon our community to commemorate June 28, 2021, as War Survivor Remembrance Day. In goodness thereof, I Joshua F. Tenorio…Lt. Governor of Guam…cause the great seal of Guam to be fixed in the capitol city of Hagatna on this 28th day of June.”

Despite the hardships that the war survivors faced, they stayed strong and were able to help rebuild the island for today’s generation.

Speaker Therese Terlaje said: “Despite all that, they kept hope, and they kept faith and they taught us very much about how to persevere and to recover. And to be strong and courageous when all odds seemed against you… they rebuilt for us the Guam that we have today, they built that out of many sacrifices. And really, I believe, out of love.”