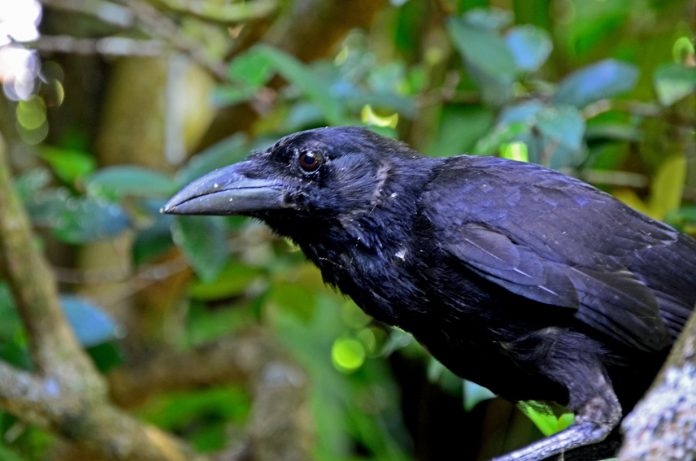 The Maria Crow, or Aga in Chamorro, can only be found on our neighboring island of Rota, after brown tree snakes wiped it off the face of Guam.

CNMI – The Mariana Crow was thriving a few decades ago. Its population, once in the thousands, now only estimated at under 200. Biologist Lindsey Niettman is part of the team who studies the species.

“The Aga is a very special bird. Historically it has been found only on the islands of Rota and Guam. After the 1990’s after the brown tree snake population exploded, it became extinct on Guam and now it is only found on Rota,” Niettman told PNC.

The bird, called “Aga” by the native Chamorro, experienced a 90% decline in its population in the past 30 years. Scientists from the Rota Avian Behavioral Ecology Program are concerned about its survival as its main predator is a growing feral cat population.

She added, “The most recent survey suggests that the population has definitely stabilized and may even be increasing which is really encouraging.”

The University of Washington took over the crow project in 2005, but research dates back to 1980. Biologists are most busy in the fall and winter, when the crow breeds.

“What were doing then is that we are finding their nests and monitoring it to see how productive they are, how many chicks they produce, and how many nests fail,” she explained.

She says a third of nests succeed in producing fledglings. They are also doing radio telemetry studies.

“We go out in the jungle with big antennas and track the crows movements and most importantly with that we are figuring out what is killing the crows,” she said.

The tag then gives a special signal when the crow dies. Separate institutions raise crows in captivity and address the feral cat population. The importance of the species spans generations.

She added, “The crows are present only on Rota and I think it has potentially cultural significance for people on Rota. It is very unique. And in terms of ecotourism, I know birdwatchers who come from all over the world just to see this special bird.”