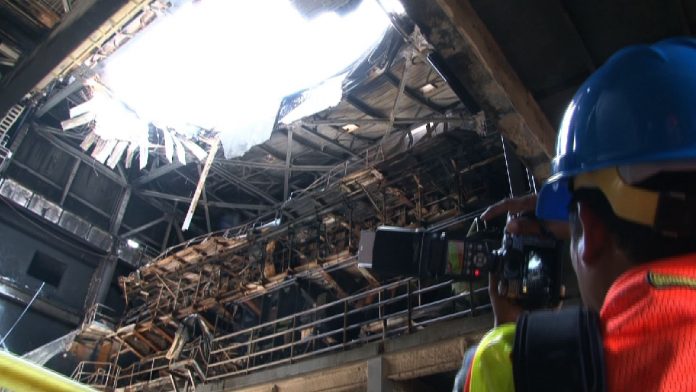 PNC brings you the exclusive first look into Cabras 3&4.

Guam – Details of the events leading up to a huge explosion at the Cabras Power Plant about two weeks ago were disclosed during a tour of the plant that was scheduled with Acting Governor Ray Tenorio today.

Last week, General Manager John Benavente told PNC that Cabras 4 could be a ‘total loss.’ We went to GPA and got a look at ground zero: the site of the explosion. The ground was still soaked with an oily substance and parts of the building were charred black, leading to the giant hole in the roof. At the beginning of the tour CCU Chairman Joseph Duenas explained to Lt. Governor Ray Tenorio the events leading up to the explosion.

“Only one generator exploded. Cabras number 4 had an explosion–it had an event. The operators were trying to bring the generator down and they experienced some problems in controlling it, so they hit the emergency stop button and it didn’t respond and there was an explosion and a big fire so they left. Cabras 3 was still running [and] they didn’t have time to hit the stop button on Cabras 3. Cabras 3 ran for another 90 seconds before it sensed the intense heat and shut itself down,” said Duenas.

With the recent worries of load shedding and the fact that GPA is running on its last reserves, Acting Governor Tenorio asked Duenas what GOV Guam can do to help. Duenas pointed out that the Department of Education is a large consumer of energy and by shutting down its air conditioning units after school is over could help the situation. Tenorio agreed and said that other GovGuam agencies will follow suit.

Tenorio also asked what residents could do to conserve energy. Melinda Camacho, Assistant General Manager of Guam Power Authority, says residents can wait a little longer to turn on high energy consuming devices such as washers and dryers. Tenorio echoed this thought, saying residents can avoid using these power-consuming machines during peak hours, which is 6-10 p.m.

Tenorio says that critical agencies are exempt from shutting down the air conditioning, and he will work with 24-hour agencies to reduce where they can.