Because they are reducing their Navy water purchase GWA has had to reroute water from the North down to Agat and Santa Rita. This rerouting of water is resulting in numerous breaks to the water lines in those villages. Ballendorf says that the lines in Agat and Santa Rita are in need of being replaced which will cost millions of dollars. Ballendorf says they do have money set aside for this in their capital improvement projects fund but she’s not sure when these line replacement projects will begin. Ballendorf says they’ve been reducing their Navy purchase and rerouting water from the North to the South for the past five to seven years now. “Now we’re really trying to get it down to zero. If I were to speak for the commission I think that they would say we would like to not purchase any Navy water at all,” said Ballendorf.

NAVFAC Marianas commanding officer Capt. Glenn Shepherd says that through buying less water GWA is spending about the same amount on Navy water as it spent last fiscal year. However if they were to stop buying Navy water completely it could result in higher rates in the future. “They are a client so I think in the long run it may have an affect on our rates in the future if we aren’t selling as many units as many gallons it could have an affect on future rates,” said Capt. Shepherd. 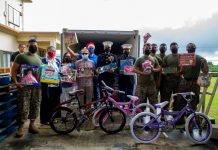