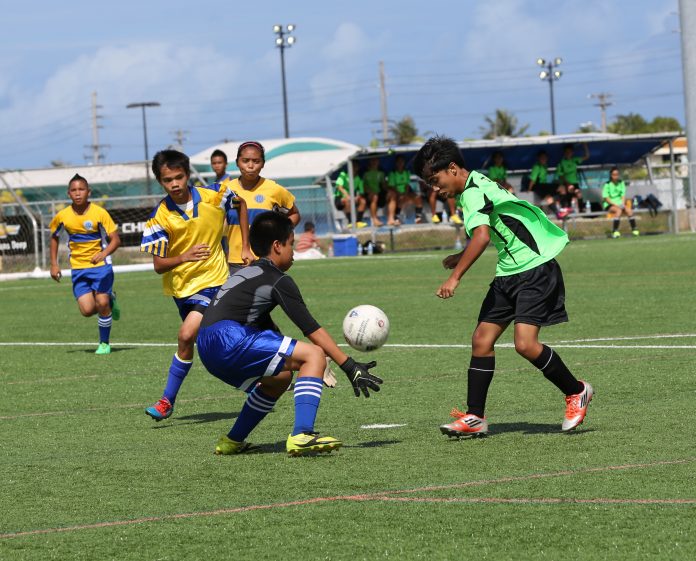 Harmon, Guam- In a rare instance, Community First Dededo Soccer Club goalkeeper Ivan Joshua F. Galutira moved back to the goal line in the goal as he watched the ASC Islanders’ Caylani Estoy prepare to take a penalty kick in the second half of a match of the U14 division of the Chevrolet Robbie Webber Youth Soccer League.

Referee Erlissa Delfin made sure Galutira was standing on the line before blowing her whistle to give Estoy the green light to take the kick. When the whistle blew and Estoy took her kick, Galutira dove to his left and secured the shot, keeping his clean sheet and helping his team defeat the Islanders.

In other U14 matches played under a scorching Saturday sun, the Wings FC blanked Tumon Soccer Club and the Strykers battled to a scoreless draw with the Sidekicks. In the day’s final U14 match, Quality Distributors defeated the Mini Masakåda 3-0.

In the day’s U17 matches, Nick Cabuhat scored a brace for Community First, but it wasn’t enough to stop the Wolverines in the 3-2 contest. The Wolverines’ Trever Riney’s second goal was the eventual game winner, adding on to Mitchell Champaco’s strike early in the first half that opened scoring for his team. In other matches, Quality Distributors Red defeated the ASC Islanders Apaka 6-2, the Southern Cobras and Wings Black settled for a 5-5 draw, the Sidekicks blanked Quality Distributors Blue 6-0, and the Southern Heat shut out the ASC Islanders Asut 4-0.

The youth clubs have one more week to sell Chevrolet Supersonic Sweepstakes raffle tickets to compete for an extra cash bonus in the fundraiser. The final drawing for the 2013 Chevrolet Sonic on display at GFA is on Jamboree Day, April 20.