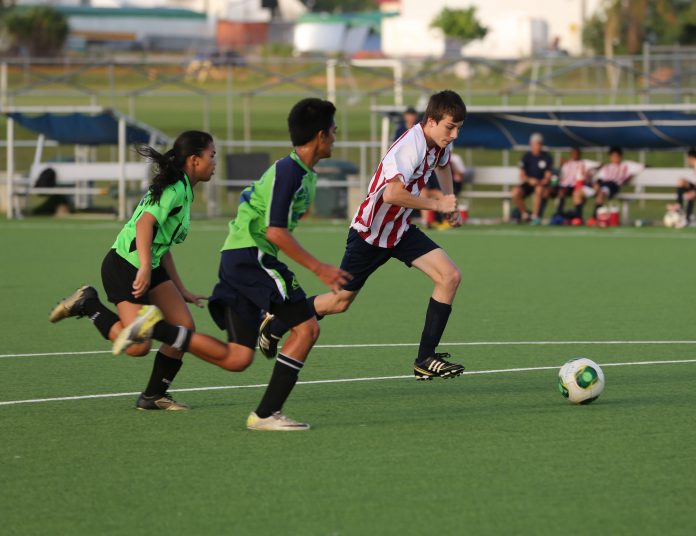 Harmon, Guam – The Southern Cobras won the battle of southern teams with a 5-3 victory over the Southern Heat, thanks in part to Keith Surber’s hat trick in the teams’ final regular season U17A match of the Docomo Pacific Robbie Webber Youth Soccer League at the Guam Football Association National Training Center.

With the win, the Cobras secured the No. 4 spot in league standings moving into the playoffs beginning Saturday. The team will face the No. 5 Wolverines at 9:30 a.m. in the first round of playoffs.

“At the beginning of the youth league season, we were a little off, but as the season progressed, we got to know each other on the team better and it just took off from there,” said Surber, a 17-year-old senior at Southern High School. “We’re looking to have fun in the playoffs. There aren’t any expectations to win, but at the same time, we don’t want to lose.”

In the Cobras-Heat match, Donovan Reyes and Jay Cruz scored the Cobras’ other goals. Gideon Tyquiengco struck twice for the Heat and teammate Riley Taijeron upped the theatrics with a successful penalty kick back flip.

In the U14 division, Ritsuki Umeda, Jordan Jasmin, Takumi Ito, and Inochi Recella scored for the top-ranked and undefeated Wings team against Community First Dededo Soccer Club. Birthday girl Tara Usita-Lee scored twice for Quality Distributors in her team’s win over the Islanders Asut. Alan Thomas, An Truong, Tiffani Lopez, and Eddie Huang also scored for Quality. The Sidekick SC shut out the Wolverines with goals from Tomas Calvo, Giancarlo Abril and Errett Bainum. The Strykers moved up to the division’s No. 2 position with its 4-2 win over the Islanders Betde. Xavier Naputi scored twice and teammates Clayton Mitchell and Elijah Nguyen scored one each for the Strykers. Caylani Estoy and Tristin Guile scored for the Islanders.

In the U12A division, the Islanders Betde scored three goals in the final eight minutes of play against the Wolverines for a 4-1 win. The Islanders Betde finish the regular season undefeated and in the No. 1 position for this weekend’s playoffs. In other matches, Richelle Ragadio, Isabella Rodriguez, Joseph Green, John Halili and Rino Buekis all scored in the Community First Dededo Soccer Club’s victory over the Islanders Asut. The Tigers defeated Quality Distributors 5-0 and the Wings picked up a win via forfeit over the Sidekick SC.