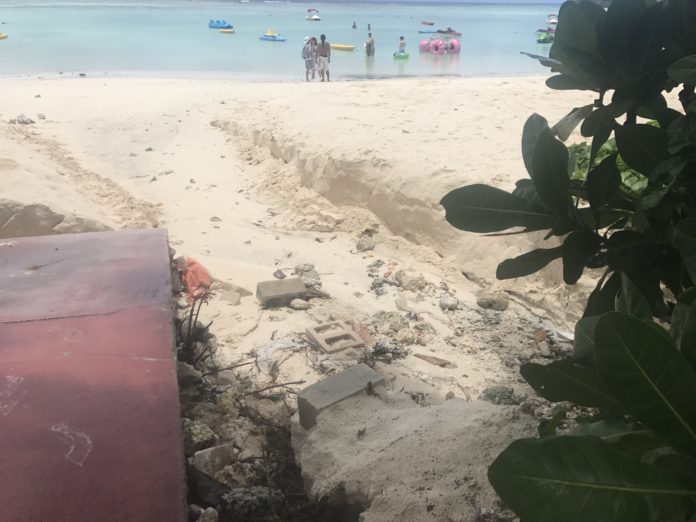 Guam – Heavy rains over the weekend caused flooding in Tumon and some erosion on Tumon beach between the Outrigger hotel and Nana’s Cafe.

A concerned citizen alerted PNC to the recent erosion. This kind of water runoff has been a major concern for environmentalists as the unnaturally occurring runoff pumps fresh water, dirt, silt, oil and bacteria into the Tumon bay marine preserve. All of these things can wreak havoc on the ecosystem and marine life of the bay.

GovGuam has been working on a Tumon Bay flood mitigation project that would allow flood waters to naturally percolate through the soil before making its way out to the ocean; however, it has seen delays due to an endangered native bird called the Marianas Moorhen. The moorhen has been found at the Fujita ponding basin which is supposed to undergo maintenance as part of the flood project. The Marianas Moorhen is a native bird that lives in wetlands.

GEDA Deputy Administrator Mana Silva Taijeron told PNC back in December that the contractor who is working on the Fujita project will “await moorhen departure from site and begin maintenance thereafter.” Taijeron said this could delay the maintenance of the Fujita ponding basin for up two months “depending upon continued presence of moorhen.” This delay in turn will cause a potential two-month delay on the entire Tumon flood mitigation project.

Taijeron said the anticipated completion of phase two of the project was slated for February of 2018. According to the Department of Agriculture there are still moorhen at the pond. PNC called GEDA for an update on the status of the project; however, our calls were not returned as of news time.