Guam – The Samurai Heat and Mangilao Soccer Club both punched their tickets to the championship game of the Aloha Maid All-Girls Soccer League with semifinal wins at the Guam Football Association National Training Center Saturday.

With Saturday’s wins, the defending champion Heat and Mangilao Soccer Club will meet to fight for the league title Nov. 24 at 11 a.m. on Mini Pitch #10. The Heat needed to overcome the Doosan Crushers and emerged as victors with a 5-3 performance. The Heat’s Colleen Naden led all scorers with four goals and teammate Ally Cruz added her team’s other goal. Mia Santos scored twice for the Crushers and Anaka Park scored once in the loss.

The Islanders Betde will face the Crushers in the battle for the league’s third place honors Nov. 24 at 11 a.m. at Mini Pitch #9. 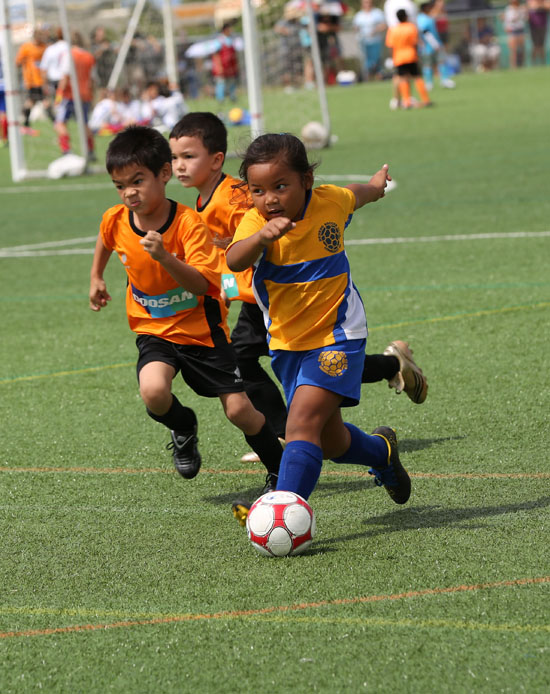 [Community First Dededo Soccer Club played a match against the Orange Crushers in the U6 division of the Chevrolet Robbie Webber Youth Soccer League at the Guam Football Association National Training Center Saturday.]

In the U14A division, Quality defeated the Strykers 4-2 and the Wings FC edged the Sidekicks 2-1. The Wings FC and the Wolverines blanked Tumon Soccer Club and the Orange Crushers in the U14B division.

Quality Blue snuck past Community First 4-3, the Wings FC and the Strykers battled to a 1-1 draw, Quality Red beat the Tigers 7-1, and the Islanders Betde edged the Wolverines 2-1 in the U12A division. In the U12B division, the Sidekicks blanked the Southern Cobras 7-0, the Wolverines slipped past Tumon 2-1, the Wings FC edged Quality 4-3, Community First and the Strykers settled for a 1-1 draw and the Samurai Heat shut out the Islanders Asut 5-0.

Both the Aloha Maid All-Girls League playoffs and the Chevrolet Robbie Webber Youth Soccer League continue Nov. 24. The youth league schedule for Week 9 is available for download on GuamFootball.com