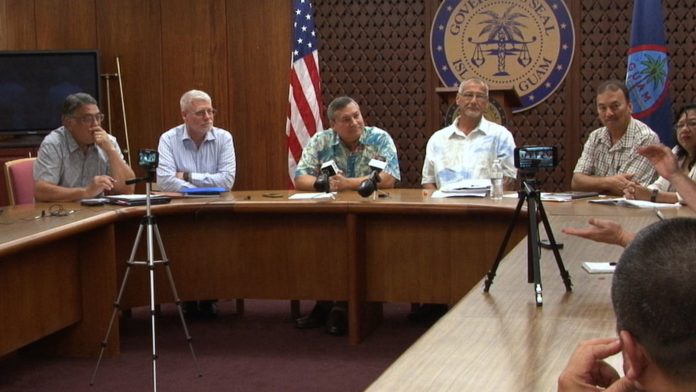 Guam – Governor Eddie Calvo called a press conference this afternoon(Thurs) to discuss the dire financial situation that GovGuam is facing due to the Trump tax cuts. The governor and his fiscal team warned that without raising revenues, GovGuam could face a payless payday as early as March which is why they are now proposing a 2 percent increase to the business privilege tax also known as the gross receipts tax.

“These are serious times and we have to act now and we have to act expeditiously and we have to be prudent in how we do things and how we operate the government of Guam,” said Department of Administration Deputy Director Vince Arriola. “We’re in a dire situation. We really are and the ability for the government to provide the services that people have come to expect with a diminished revenue source and still be able to prioritize the payment of tax refunds continue government operations and also pay our vendors is deeply impacted with that reduction in income,” said Bureau of Budget Management and Research director Lester Carlson.

The administration says they’ve begun restricting allotments and agencies have begun making their cuts and it’s still not enough. So, what is the solution? “The major thrust here is to increase revenues and that’s what this government is trying to do. That’s the best remedy. It’s the remedy that this team and the governor has put forward,” said DOA Director Edward Burns. The amount they are putting forward now is a 2 percent increase to the business privilege tax with a two-year sunset provision. In fact, it’s something Carlson says everyone seemed to agree with including senators who were at the last special economic services meeting “We actually walked away from that meeting with people going like this (head nodding yes gesture) two percent increase in BPT sunset in a couple of years while we put things like internet sales tax together and we build back our revenue,” said Carlson.

“We had a very good discussion yesterday(Weds.) with the Speaker. So, I fully anticipate a bill will be moved. If not from the legislature then from my hand. We came away from that conversation understanding that there is a need to move quickly and I wanna congratulate the Speaker on that. And again, our people have sent over the bill for the next fiscal year but now it’s a matter of dealing with this year. And I have full expectations and the speaker does too as well, that I anticipate us moving rather quickly. Again, whether it’s an introduction of a bill from my office or an introduction of a bill from the speaker or the legislature that a bill will move and will move rather rapidly through the legislature,” said Governor Calvo adding, “Where was this problem created? And I think we all have to understand too this problem created was a policy matter done in Washington D.C. Do we all blame ourselves for a problem that was created by Washington D.C.? Or do we do what we’ve done in the past and roll up our sleeves and figure a way how to make do?”